Home » blog » Your Body Thinks Obesity Is A Disease

Your Body Thinks Obesity Is A Disease 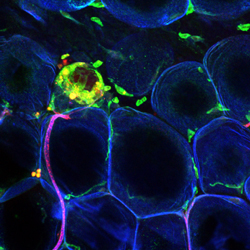 Yesterday, the 4th National Obesity Student Summit (#COSM2014) featured a debate on the issue of whether or not obesity should be considered a disease.

Personally, I am not a friend of such “debates”, as the proponents are forced to take rather one-sided positions that may not reflect their own more balanced and nuanced opinions.

Nevertheless, the four participants in this “structured” debate, Drs. Sharon Kirkpatrick and Samantha Meyer on the “con” team and Drs. John Mielke and Russell Tupling on the “pro” team (all from the University of Waterloo) valiantly defended their assigned positions.

While the arguments on the “con” side suggested that “medicalising” obesity would detract attention from a greater focus prevention while cementing the status quo and feeding into the arms of the medical-industrial complex, the “pro” side argued for better access to treatments (which should not hinder efforts at prevention).

But a most interesting view on this was presented by Tupling, who suggested that we only have to look as far as the body’s own response to excess body fat (specifically visceral fat) to determine whether or not obesity is a disease.

As he pointed out, the body’s own immunological pro-inflammatory response to excess body fat, a generic biological response that the body uses to deal with other “diseases” (whether acute or chronic) should establish that the body clearly views this condition as a disease.

Of course, as readers are well aware, this may not always be the case – in fact, the state of “healthy obesity” is characterized by this lack of immunological response both locally within the fat tissue as well as systemically.

Obviously, it will be of interest to figure out why some bodies respond to obesity as a disease and others don’t – but from this perspective, the vast majority of people with excess weight are in a “diseased” state – at least if you asked their bodies.

While this is a very biological argument for the case – it is indeed a very insightful one: it is not the existence of excess body fat that defines the “disease” rather, how the body responds to this “excess” is what makes you sick.

As readers, are well aware, there are several other arguments (including ethical and utilitarian considerations) that favour the growing consensus on viewing obesity as a disease.

Of course,  calling obesity a disease should not detract us from prevention efforts, but, as I often point out, just because be treat diabetes or cancer as diseases, does not mean that we do not make efforts to prevent them.

If calling obesity a disease increases resources towards better dealing with this problem and helps take away some of the shame and blame – so be it.