Home » blog » When Obesity is a Sign of Good Health 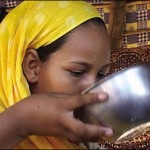