Home » blog » The Limitations of Checklists in Assessing Mental Health

The Limitations of Checklists in Assessing Mental Health 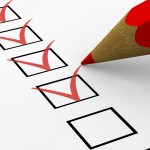 Unfortunately, most practitioners, who are called upon to give weight management advice, have little to no formal training in diagnosing, let alone dealing with, mental health disorders.

This is when they sooner or later fallback on checklists – often self-administered – to screen for the presence of mental illness.

In a ‘perspective’ piece recently published in the New England Journal of Medicine, Johns Hopkins University’s Paul McHugh and Phillip Slavney, discuss the limitations of overly relying on checklists for mental health assessments.

As they explain, the use of checklists to assess the presence of ‘symptoms’, proliferated in psychiatric practice following the introduction of the Diagnostic and Statistical Manual (SDM), which introduced a much needed ‘standardisation’ in the assessment of mental health disorders.

As a downside however, simply counting or checking off symptoms on a list has resulted in a shift towards ‘phenomenology’ rather than to consideration of etiological differences in clinical symptoms that may appear similar both to the patient and to an observer.

Thus, for example, simply counting off symptoms, may lead to the ‘diagnosis’ of depression in someone who is bereaved, has classic melancholia or is simply ‘demoralised’ by circumstances. (I would add untreated sleep apnea to the list of potential confounders)

“The mixing of similar-appearing patients who have conditions that are distinct in nature probably explains why the use of this diagnostic category expanded over time and suggests why the effectiveness of antidepressant medications given to people with a diagnosis of major depression has, of late, been questioned.”

“This tendency to blur natural distinctions may explain why other DSM diagnoses – such as post-traumatic stress disorder (PTSD) and attention deficit disorder – have been overused if not abused.”

Indeed, as the authors explain, the introduction of the DSM with,

“Its emphasis on manifestations persuaded psychiatrists to replace the thorough ‘bottom-up’ method of diagnosis, which was based on a detailed life history, painstaking examination of mental status, and corroboration from third-party informants, with the cursory ‘top-down’ method that relied on symptom checklists.”

Thus, although “checklist diagnoses” cost less time and money, “they fail woefully to correspond with diagnoses derived from comprehensive assessments.”

This not only results in over and mis-diagnoses but can also be misused for ‘marketing’ certain ‘diagnoses’ by clinicians, industry, and other interest groups.

Despite such overlap, the authors suggest that such an ‘etiological’ grouping of disorders would encourage a more analytical approach to assessments and treatments.

Regular readers may discern similarities between this approach and the ‘etiological’ approach that I have previously recommended for the ‘differential’ diagnosis of obesity.

Thus, although using checklists will certainly continue to be a simple way to screen individuals, to rely on them for making a diagnosis or to initiate treatments based on the number of ticked boxes would be poor medical practice.

This should not discourage us from using symptom checklists in our practice – it should, however, encourage us to delve deeper into the underlying causes and impacts of these symptoms before pronouncing a diagnosis or ‘labeling’ someone with a mental health disorder.