Home » blog » The Health Benefits of Coriander – and Other Stories

The Health Benefits of Coriander – and Other Stories 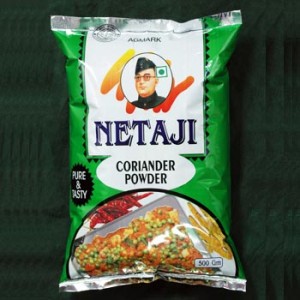 While in India, I have plenty of time to read the Indian newspapers and magazines, that have circulations Western publications can only dream of.

Not surprisingly, “health and beauty tips” are a staple feature with articles proclaiming the benefits of everything from yoga to bariatric surgery.

And of course, when it comes to traditional Indian herbs or spices, almost every ingredient is offered as a panacea.

Here, for example, are the virtues of using coriander (dhanya or cilantro), a commonly used spice and garnish (taken from a recent article in the Times of India):

– Coriander helps in digestion; helps settle an upset stomach and prevent flatulence- Coriander shields you against the Salmonella bacteria

– Coriander being an anti- inflammatory helps in easing symptoms of arthritis

– It protects against urinary tract infections

– It is a great source of dietary fibre, iron and magnesium

– Coriander is rich in phytonutrients and flavonoids

– In case of women suffering from a heavy menstrual flow, boil six grams of coriander seed or dhanya in 500 ml water, add a tbsp of sugar and consume while warm.

– Arthritis patients can boil coriander seeds in water and drink the concoction.

– Use a paste of coriander and turmeric juice treat pimples and blackheads.

So there we have it – to summarize, the “super food” coriander is apparently good for the following illnesses and complaints: diabetes, dyslipidemia, indigestion, flatulence, arthritis, salmonellosis, urinary tract infections, nausea, menorrhagia, pimples, blackheads and of course “detoxification” (whatever that means).

These types of claims are of course are by no means particular to Indian media – similar articles with similar laundry lists of unsubstantiated or exaggerated claims abound in publications around the world – pandering to an audience that is happy to indulge in “magical thinking”.

For me, any one of those statements are like a nail scratching a black board (When did boards turn white?).

If we assume this to be true, my first question would be, “By how much?” I would also want to know how long it takes for this “effect” to set in and how long it lasts. Should I expect a “rebound” once the effect wears off. Obviously, I’d want to know the dose-response relationship and whether there is a dose beyond which I would expect toxic effects (like long-lasting hypoglycemic shock).

I’d be curious about whether this effect is contained in the leaf, seed or root of this plant. Does it lose its effect with cooking or frying?

Then, of course I would want to know how this works – is coriander an “insulin-sensitizer” – if yes, through what mechanism? Does it work more like an AMPK activator, a PPARg agonist, or via Glut-4 transporters? Or does coriander work more as an insulin secretagogue or perhaps indirectly via the GLP-1 pathway? Perhaps coriander interferes with hepatic gluconeogenesis or even carbohydrate absorption?

As a clinician, I’d want to know whether I should be warning my diabetic patients about adjusting their diabetes meds if they chose to garnish their supper with coriander. I’d also wonder whether lower blood sugar levels would prompt an increase in appetite and thereby lead to overeating and weight gain?

But then, may be I am just too caught up in my “biomedical” thought structure – perhaps, I should just accept the “ancient wisdom” that, “Coriander lowers blood sugar” and move on…after all, coriander also helps with flatulence – which has me asking….

You get the idea.

Irrespective of any health benefits, I can certainly attest to the fact that coriander is an essential ingredient of any Indian curry – I’m happy to just leave it at that.