The Canadian Obesity Network in Washington 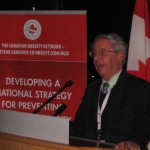 So on the last day of the 27th Annual Scientific Meeting of The Obesity Society, I would like to briefly talk about an event that took place on Monday night: a Meet the Canadians Reception, hosted by the Canadian Obesity Network held at the Canadian Embassy in Washington DC.

The reception, attended by around 150 Canadian obesity researchers and non-Canadians wanting to learn more about obesity research in Canada, was certainly an event that helped draw attention to the Canadian presence at this meeting.

As Guy Saint-Jacques, the Deputy Head of Mission, said in his welcoming words: obesity is an important issue that affects millions of people both North and South of the border and can only be addressed through broad collaborations between researchers, decision makers and other stakeholders.

Phil Sherman, representing the Canadian Institutes of Health Research (CIHR) emphasized the continued strong support for obesity research in Canada, building on the tremendous success of capacity building in this field that was accomplished over the past 7 years thanks to the strategic decision of one CIHR institute (INMD), under the leadership of Diane Finegood to have made obesity its single strategic priority.

Karen Patte Wigh, on behalf of the Canadian Obesity Network Student and New Professionals, emphasized the many activities conducted by the network that go directly towards supporting students and trainees working in diverse fields relevant to obesity prevention and management.

Philip James, President of the International Association for the Study of Obesity (picture) highlighted the work done by the Canadian Obesity Network in the four short years of its existence to bring together obesity researchers, clinicians, decision makers and stakeholders from across the country in a manner that could very much serve as a model for the creation of similar networks in other countries.

As Scientific Director of the Network, I would like to take this opportunity to thank the Embassy staff for allowing us access to the architecturally spectacular Canadian Embassy, to the staff of the Obesity Network who worked hard to mak this reception possible, to the Obesity Society who helped us to schedule and publicize the event and to everyone who came out to “meet” the Canadians.

I have no doubt that the “Meet the Canadians” reception at the Annual Obesity Society meetings, a tradition that is now in its fourth year, will continue to be an important opportunity for North American researchers to meet and network in the years to come.