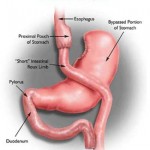 Compared t0 behavioural or medical treatments, bariatric surgery is by far the most effective treatment for severe obesity to date.

Nevertheless, surgery is surgery and no decision to have major surgery should ever be taken lightly. Despite its significant positive impact on over all health and well-being (at least for the vast majority of patients), many patients may experience moderate to severe symptoms or problems they may not have had prior to surgery.

This is exemplified in a study by Bjørn Richelsen and colleagues from Denmark published in JAMA Surgery.

In their study, the researchers conducted a survey of all available patients (n=2,238), who had undergone gastric-bypass surgery in the Central Denmark Region between January 1, 2006, and December 31, 2011.

Their responses were compared to those of 89 individuals matched for sex and body mass index.

However, almost 90 % of patients reported 1 or more symptoms after surgery, which were serious enough for 70% of them to contact their health care system.

Almost 30% of all patients had to be hospitalized in the 4.7 years of follow-up, compared to only 7% in the control group.

Women, patients younger than 35, smokers, unemployed persons and those with surgical symptoms before surgery, were at greatest risk for symptoms.

While these data may be an overestimate (given that less than 65% of eligible patients responded to the survey), and one may perhaps argue that patients with symptoms were perhaps more likely to respond, there is little doubt that many (if not most) people undergoing gastric-bypass surgery will have some symptoms related to surgery.

No doubt, there appears room for improvement as far as surgery is concerned.

Bottom line: severe obesity remains a difficult disease to treat and our current treatments are far from perfect.