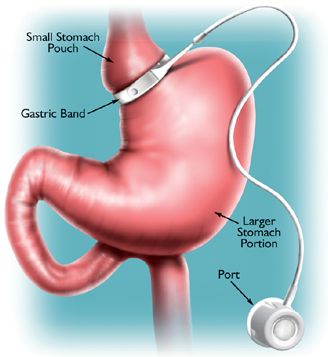 In previous posts, I have discussed the role of nutrition, metabolism, mental health and physical activity in weight regain after bariatric surgery.

While these factors together account for the vast majority of weight regain in patients, our systematic review of post-surgery weight regain published in Obesity Surgery also looks at the role of surgical and anatomical factors that may limit weight loss or promote weight regain.

As one may expect, these factors vary between the different surgical procedures.

“Technical failure” with adjustable gastric banding (AGB), the simplest but least effective of bariatric surgical procedures, may often simply be related to lack of appropriate follow-up and failure to properly adjust the band. Indeed,  failure to periodically readjust the band may well be the most common cause of “technical failure” with this procedure..

Band-failure may also result from enlargement of the gastric pouch, a problem that in one case series was reported in almost 50% of patients at 4 years. In addition, proximal slippage of the band has been described in almost 10% of cases, in turn limiting the effectiveness of this intervention.

Thus, it is important for patients who are experiencing weight recidivism after band placement to be assessed for potential pouch distension or slippage of the band as factors contributing to failure. Pouch distension can oftentimes be managed by complete band deflation, a low calorie diet, reinforcement of portion size and follow-up contrast study in 4–6 weeks.

This conservative management strategy can be successful in over 70 % of patients.

Band slippage can be managed similarly, but oftentimes, surgical intervention is required with band re-positioning or band replacement or removal.

Obviously, weight regain is virtually the rule in cases where the band has to be removed due to intolerance, persistent reflux or other problems. Thus, although “reversibility” is often promoted as a positive “feature” of this operation, this “feature” makes little sense given that band removal will virtually always result in weight regain.

Considering the rather high rates of band removals reported in some case series, one may well wonder about whether this operation can really be considered a “permanent” measure.

As with all bariatric procedures, regular follow-up and dietary compliance is essential for optimal outcomes, but because of its limited mode of action, it is not surprising that the AGB, although the least-invasive operation, may well be the surgical procedure most prone to failure in the long-term.

If you have experienced weight recidivism after gastric banding, I’d certainly like to hear your story.