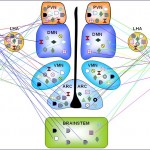 Melanocyte-stimulating hormone (a-MSH), which is produced from the hormone precursor proopiomelanocortin (POMC) and acts on the hypothalamic melanocortin-4 receptor, plays a key role in the regulation of satiety and energy expenditure.

In very rare instances, mutations of the gene coding for POMC can cause severe early onset obesity characterised by increased appetite. Due to other effects of POMC deficiency, patients will present with pale skin, red hair and clinical signs of hypocortisolism.

Now, a paper by Peter Kühnen and colleagues published in the New England Journal of Medicine, shows that treating patients with the melanocortin-4 receptor agonist, setmelanotide, can result in significant reduction in appetite and body weight.

The open-label study was performed in two adult patients with POMC deficiency, in cooperation with Rhythm Pharmaceuticals, which provided the study medication and regulatory support.

Both patients weighed around 150 Kg with marked hyperphagia and both responded to treatment with a substantial reduction in appetite and dramatic weight loss of over 20 Kg over 12-13 weeks.

After a brief interruption, one patient was again treated for 42 weeks, ultimately losing 51 kg (32.9% of her initial body weight).

“Setmelanotide appeared to completely reverse hyperphagia, leading to impressive weight loss and normalization of insulin resistance. More important, both patients reported a dramatic improvement in their quality of life after the initiation of setmelanotide therapy. Moreover, the substantial and ongoing reduction in body weight was similar to the changes observed after leptin administration in patients with leptin deficiency.”

Over all the treatment was well tolerated with no major adverse effects.

While these observations were made in very rare patients with documented POMC deficiency, these findings may have broader implications for individuals with more common “garden-variety” obesity.

“Both patients described here had very high leptin levels before treatment, suggesting leptin resistance. In patients with proopiomelanocortin deficiency, the leptin signal is probably not properly transduced into anorexigenic responses, given the lack of melanocyte-stimulating hormone. Setmelanotide substitutes for melanocyte-stimulating hormone and binds at its receptor, thus overcoming leptin resistance. On the basis of the observation that obese patients without known genetic abnormalities have severe leptin resistance and regain weight owing to a post-dieting increase in appetite, we speculate that setmelanotide may also be effective in nongenetic forms of obesity.”