Patchy Progress on Obesity Prevention – Time To Expand The Food and Activity Paradigm? 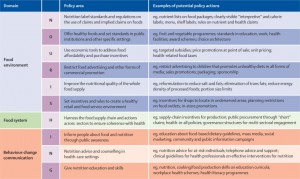 In last week’s 2015 Lancet series on obesity, the majority of papers focus on policy interventions to address obesity. It suggests that a reframing of the obesity discussion, that avoids dichotomies (like nature vs. nurture debates) may provide a path forward – both in prevention and management.

The policy framework presented by Christina Roberto and colleagues in The Lancet, is based on the NOURISHING framework, proposed by the World Cancer Research Fund International to categorise and describe these actions.

Together, the actions in this framework address the food environment (e.g. food availability, taxation, restrictions on advertising, etc.), food systems (e.g. incentives and subsidies for production of healthier foods) and individual behaviour change (e.g through education and counselling).

This “food-centric” view of obesity is complemented by recognising that physical activity, much of which is dictated by the built environment and captivity of the population in largely sedentary jobs, also has a role to play.

On a positive note, the Christina and colleagues suggest that there may be reasons for careful optimism – apparently 89% of governments now report having units dedicated to the reduction of non-communicable diseases (including obesity), although the size and capacity of many of these units is unknown.

On the other hand, despite an increasing number of such efforts over the past decades, no country has yet reversed its epidemice (albeit there is a flattening of obesity growth rates in the lower BMI ranges in some developed countries – with continuing rise in more severe obesity).

Despite the potential role of government policies in reducing non-communicable diseases (including obesity) by “nudging” populations towards healthier diets and more physical activity, the authors also note that,

“…the reality is that many policy efforts have little support from voters and intended programme participants, and although the passage of policies is crucial, there is also a need to mobilise policy action from the bottom up.”

Indeed, there is growing list of examples, where government policies to promote healthy eating have had to be reversed due to lack of acceptance by the public or were simply circumvented by industry and consumers.

Nevertheless, there is no doubt that policies in some form or fashion may well be required to improve population health – just how intrusive, costly and effective such measures will prove to be remains to be seen.

All of this may change little for people who already have the problem. As the article explains,

“There are also important biological barriers to losing excess weight, once gained. Changes in brain chemistry, metabolism, and hunger and satiety hormones, which occur during attempts to lose weight, make it difficult to definitively lose weight. This can prompt a vicious cycle of failed dieting attempts, perpetuated by strong biological resistance to rapid weight loss, the regaining of weight, and feelings of personal failure at the inability to sustain a weight-loss goal. This sense of failure makes people more susceptible to promises of quick results and minimally regulated claims of weight loss products.”

Not discussed in the article is the emerging science that there may well be other important drivers of obesity active at a population level that go well beyond the food or activity environment – examples would include liberal use of antibiotics and disinfectants (especially in agriculture), decreased sleep (potentially addressable through later school start times and mandatory afternoon naps in childcare settings), increasing maternal age at pregnancy (addressable by better access to childcare), time pressures (e.g. policies to address time-killing commutes), etc.

Perhaps what is really needed is a reframing of obesity as a problem where healthy eating and physical activity are seen as only two of many potential areas where policies could be implemented to reduce non-communicable diseases (including obesity).

Some of these areas may well find much greater support among politicians and consumers.