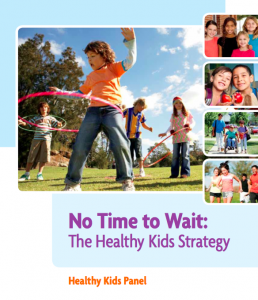 Yesterday, a panel of experts appointed by the Ontario Government, tasked with developing a plan to reduce childhood obesity by 20 per cent over five years, submitted its report called No Time to Wait: The Healthy Kids Strategy.

While the report makes all the expected recommendations (some based on good evidence, some more on opinion), the interesting nuances are in the report itself (not so much in the executive summary, which is why they may be easily lost in the discussion).

As an example, although the report is directly aimed at reducing childhood obesity, the report actually states that,

“Health is about more than weight. In fact, a child who is a little overweight and who is fit and active is healthier than a child who is the “right” weight for his or her age and height but is more sedentary. Focusing too much on weight is stigmatizing and will not address many of the factors that contribute to unhealthy weights.”

Hopefully this means that we will not see stigmatizing “anti-obesity” campaigns similar to the now notorious Atlanta shame and blame tactics.

Indeed, as one interviewed parent comments,

“…He [my overweight son] has lately been under a lot of pressure because of the focus of the media on overweight kids and this has been very hurtful to him, so people need to exercise caution when they are saying things to kids about their weight because it hurts.”

Clearly, the panel recognises the importance of factors like lack of time as expressed in several comments from parents:

“Parenting is a full-time job and it is hard to find the time between two full-time jobs, after school activities, doctors’ appointments, etc., to plan/make good healthy meals and more time for kids to just play outside.”

“I have a very busy life. I am working full-time and a single parent. I cook once a week – maybe twice. The rest [of the time] I have to buy.”

“I don’t have time. I’m a single mother of two and I work. By the time I come home, I’m tired. I have to cook, help with homework, so many things. I would like to be more active with my kids, but by the time it’s nine at night, I’m done.”

Obviously, while the panel recommends a suite of solutions aimed at educating parents (especially mothers), restricting advertising and limiting access to high caloric foods and beverages and promoting healthy communities, addressing the problems of time starvation and the higher costs of healthy foods, is perhaps beyond the scope of what the government can do (unless they want to get into the business of providing mandatory day care or legislating more (paid?) time off work for parents, who are trying to raise healthier kids – a not uncommon practice in many European countries, especially those with lower childhood obesity rates).

Just how many of these recommendations will be implemented is anyone’s guess. Whether the Ontario government will find the proposed $80 million per year in new funding to address childhood obesity and whether these millions will indeed translate into a significant reduction in childhood (and subsequent adult) obesity certainly remains to be seen.

If nothing else, the panel recommendations at least provides a menu of possible strategies, from which the politicians will hopefully chose wisely.

Doing nothing is certainly not an option.