Will Salt Restriction Lead to Unhealthier Diets for Supertasters? 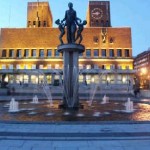 I am currently in Oslo for the 20th European Meeting of the European Society of Hypertension. Some of my readers may recall that 25 years ago, I started my research career with studies on the effects of salt on blood pressure – the debate on salt reduction was not new then – the debate is still alive today.

The question is not whether or not increased salt intake can increase blood pressure in some people – indeed, it does and much of my work at the time focused on trying to understand the physiology and genetics of this phenomenon.

Proponents of sodium restriction point to the number of heart attacks and strokes that could theoretically be prevented if population-wide salt reduction did indeed translate into lower blood pressure for the population, but to this date, this has yet to be shown in a prospective randomized-controlled trial proving that eating less salt actually saves lives.

Critics of these proposals fear that reducing the salt intake of the population may have unintended consequences for some.

A new spin on this theory of unintended consequences now comes from a paper by John Hayes and colleagues from Pennsylvania State University, published in the latest edition of Physiology and Behavior.

Hayes and colleagues examined the response of so-called “bitter supertasters” to varying amounts of salt in a wide range of foods. These bitter supertasters make up about 25% of the population and are genetically hypersensitive to bitter tastes, leading them to naturally avoid some vegetables and other foods that taste naturally bitter.

The researchers assessed the liking and intake of foods with varying amount of saltiness among 87 healthy adults (45 men).

The researchers conclude that, variation in sensations from salt is associated with differences in hedonic responses to high-sodium foods and thus sodium intake between bitter-supertasters and non-supertasters.

Despite adding less salt, bitter supertasters consumed more sodium through food, as salt was more important to preference, both for its salty taste and masking of bitterness.

The researchers suggest that bitter-supertasters may use increased salt to mask bitterness in naturally bitter foods including vegetables and other foods that may be deemed to be healthy.

Reducing salt intake may make these foods less appealing to supertasters and may therefore adversely affect their nutrient intake.

Whether or not this is in fact true, it does appear that some people may have a natural (genetic) preference for higher salt in their diets – and may respond to population wide restrictions in salt use by simply reaching for the shaker.