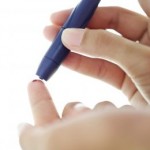 I have often blogged about the impact of excess weight in pregnancy on both the health of the mother and the infant.

The need to manage gestational diabetes, a frequent complication in overweight and obese women, is well established but the evidence for mild cases is less clear.

This question was now addressed by Mark Landon and colleagues on behalf of the Eunice Kennedy Shriver National Institute of Child Health and Human Development Maternal-Fetal Medicine Units Network in a paper just published in the New England Journal of Medicine.

This multicenter trial randomised a total of 958 women who were in the 24th to 31st week of gestation and who met the criteria for mild gestational diabetes mellitus (i.e., an abnormal result on an oral glucose-tolerance test but a fasting glucose level below 95 mg per deciliter [5.3 mmol per liter]) to usual prenatal care (control group) or dietary intervention, self-monitoring of blood glucose, and insulin therapy, if necessary (treatment group).

Although there were no significant differences in the primary outcome consisting of a composite of stillbirth or perinatal death and neonatal complications, including hyperbilirubinemia, hypoglycemia, hyperinsulinemia, and birth trauma, there were significant reductions with treatment as compared with usual care in several prespecified secondary outcomes, including mean birth weight (3302 vs. 3408 g), neonatal fat mass (427 vs. 464 g), the frequency of large-for-gestational-age infants (7.1% vs. 14.5%), birth weight greater than 4000 g (5.9% vs. 14.3%), shoulder dystocia (1.5% vs. 4.0%), and cesarean delivery (26.9% vs. 33.8%).

Interestingly, while the intervention group only gained 2.8 Kg during the pregnancy, the control group gained 5 Kg.

Treatment of mild gestational diabetes mellitus also reduced the rates of preeclampsia and gestational hypertension (combined rates for the two conditions, 8.6% vs. 13.6%; P=0.01).

The authors conclude that although treatment of mild gestational diabetes mellitus may not significantly reduce the frequency of stillbirth, perinatal death and several neonatal complications, it does reduce the risks of fetal overgrowth, shoulder dystocia, cesarean delivery, and hypertensive disorders.

Obviously, the findings cannot be attributed to the effects of the intervention on weight alone, however, they do support the notion that limiting weight gain during pregnancy in overweight and obese women, may be beneficial for both mother and child.