The Social Pain of Weight Bias 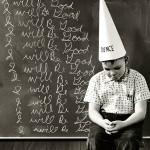 On my way to the Korean Society for the Study of Obesity meeting in Seoul, Korea, I happened to pick up a copy of a magazine called Strategy+Business, in which I came across an article by David Rock, author of Your Brain at Work.

In this article that primarily deals with how neuroscience research is revealing the social nature of the workplace, Rock discusses the evidence that social discrimination results in a mental and physical threat response that is in no way different from the emotional and physical response to pain and torture.

Quoting the work of Naomi Eisenberger, a neuroscientist at the University of California Los Angeles (UCLA), Rock explains how functional brain imaging studies show that exposing normal subjects to rejection and exclusion activates the same parts of the brain (e.g. the dorsal portion of the anterior cingular cortex) that are also involved in the distressing component of pain.

Matthew Lieberman, another researcher at UCLA, hypothesizes that the reason that being rejected or discriminated against activates the same threat response as pain or abuse is because for us as social beings, social connection to caregivers is fundamental for our survival. In the same manner that a sudden unexpected physical threat can elicit a fight or flight response, a social threat (as elicited by discrimination or rejection) can profoundly arouse the limbic system leading to the activation of hormones and behavioural responses that will work to minimize this threat. The same neuronal responses that drive us towards food or away from predators are triggered by our perception of the way we are treated by other people.

Given the importance of social interaction for human survival, it is really not surprising that rejection by a parent, lover, employer, co-worker or even a stranger on the street can “literally” hurt – pain that is in no way different from the emotional pain caused by physical injury.

In the same manner in which chronic pain is mentally and physically taxing and leads to a loss of functioning and productivity, social discrimination and rejection can impair analytical thinking, creative insight, and problem solving, resulting in a sense of despair and helplessness – not a useful response in any context.

In contrast, being made to feel good about yourself by being loved, admired, respected and recognized can drive individuals to perform at their best.

According to Rock, nothing is more important than being accepted, appreciated, loved and treated fairly to allow us to function to our full capacity – not just in a work environment. The human brain is primarily a social organ – its physiological and neurological reactions are directly and profoundly shaped by social interactions.

As social beings, we are constantly assessing how social encounters advance or diminish our status. Work done by Hidehiko Takahashi and colleagues show that when people realize that they may compare unfavoroubly to someone else, the threat response kicks in, releasing cortisol and other stress hormone. There is now ample evidence from studies in primates and other animals that social stress alone can lead to the deposition of abdominal fat and development of a full-blown metabolic syndrome.

Michael Marmot, in his book The Status Syndrome, How Social Standing Affects our Health and Longevity, describes how high social status correlates with longevity and health even when factoring in for income, education and other confounders.

While Rock focuses on the importance of these findings for creating healthier work environments, the same observations are perhaps very relevant to how we as individuals and as society address obesity and interact with overweight and obese people.

As I have often blogged before, overweight and obese people face discrimination and weight-bias everyday – in school, on the play ground, at home, at work, at health care visits, in virtually every social setting including from strangers on a bus.

The next time we discriminate against or make a disparaging remark about someone’s weight, we may as well punch them in the face: the resulting pain and suffering is exactly the same.