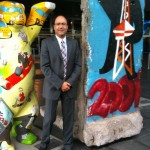 This weekend, I attended a Cardiovascular Risk Reduction Symposium in Berlin.

Co-incidentally, Saturday also happened to be the 20th anniversary of the fall of the Berlin wall.

Some of you may know that I was born in Berlin and lived there when the wall went up, for many years raised my kids in the shadow of the wall (a few blocks from our apartment), and was at the wall the night it came down (you probably saw me waving at the cameras on CNN).

So being in Berlin again for the 20th anniversary of this event was quite a treat.

One of the highlights of the celebration at the Brandenburg gate was the reunion of two giant marionettes (one of them over 7.5 m high, operated by a whole crowd of liveried puppeteers, who used their own weight to move them around), who for several days wandered the streets of former East and West Berlin before finding each other. It so happened, that on my first night in Berlin, I did in fact see the female puppet sound asleep not too far from the gate (click here to watch the meeting of the giants on YouTube).

Speaking of sleeping giants, this may be the place to draw attention to the first large randomized trial on the effect of weight loss on sleep apnea (a common problem in overweight and obese patients).

In this study, just published in the Archives of Internal Medicine, Foster and colleagues on behalf of the Look AHEAD Research Group, report on the outcomes of a substudy on obstructive sleep apnea in obese patients with type 2 diabetes: the Sleep AHEAD study.

The study included 264 participants (average age 61, average BMI 37) with an apnea-hypopnea index (AHI) of 23.2 events per hour were randomly assigned to either a behavioral weight loss program or 3 group sessions on diabetes support and education.

The intensive lifestyle intervention participants lost about 11 Kg more than the control group at 1 year resulting in a dramatic reduction of apnoic events to 10 per hour. At 1 year, more than 3 times as many participants in the intervention group had total remission of their sleep apnea.

Initial AHI and weight loss were the strongest predictors of changes in AHI at 1 year.

This is the first large randomised-controlled trial to actually demonstrate, what patients and clinicians have long suspected, that even rather modest weight loss (in this study around 22 lbs), can result in very significant and relevant improvements in sleep apnea.

Having spent the last 48 hours in Berlin, it is clear, in the past 20 years a sleeping giant has once again awakened. Given all the activities and sights in this exciting city, visitors will likely leave sleep deprived only to hopefully fall into a non-obstructed coma on their trip home.