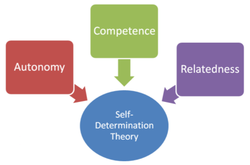 When it comes to changing behaviours, it is important to understand what drives motivation.

Two well known frameworks often used in this context are the transtheoretical model of ‘Stages of Change’ and ‘Motivational Interviewing’, an intervention strategy that can help reveal and deal with ambiguity, toward changing the status quo.

Another theoretical framework that may well provide a deeper foundation for both Stages of Change and Motivational Interviewing is Self-Determination theory.

A paper by Heather Patrick and Geoffrey Williams, published in a recent issue of the International Journal of Behavioral Nutrition and Physical Activity, discusses how Self-determination theory can be applied to health behaviour together with motivational interviewing.

As the authors explain:

Although most health behaviours start out as extrinsically motivated, they can become ‘internalized’ over time.

“According to SDT, the least internalized form of regulation is external and reflects engaging in behaviors to gain some reward or avoid some negative contingency. So, for example, someone may stop smoking because his surgeon will not perform needed coronary artery bypass surgery unless he stops smoking first, or because he wants the $800 his employer is offering to smokers for stopping.

Introjected regulation involves engaging in behavior out of some sense of guilt or obligation or out of a need to prove something to oneself or others (i.e., enhance self-worth). Thus, a person may stop smoking because she would feel guilty about the emotional and financial turmoil her family would have to face if she were to have a prolonged illness and early death.

The next most internalized form of regulation (i.e., the first level of autonomous regulation) is called identified in which case a person engages in a behavior because it is important to them. For example, someone may stop smoking because he personally believes it is an important goal to accomplish.

Finally, the most internalized form of extrinsic motivation is integrated. Integrated regulations are motives for behaviors that are important to the person, and they are engaged because they are also consistent with one’s other goals and values. So, someone may stop smoking because she values her health, and quitting smoking is consistent with her other goals in life (e.g., maintaining a regular exercise routine, living longer to enjoy her family).”

But how do such extrinsic motivators become internalised?

“SDT has identified three psychological needs critical to supporting the process of internalization and the development of optimal motivation and personal well-being.

The need for autonomy reflects the need to feel choiceful and volitional, as the originator of one’s actions.

Finally, relatedness reflects the need to feel close to and understood by important others.

When people experience the satisfaction of these needs in a given context, they are more likely to be autonomously self-regulated around the behaviors relevant to that context.

Thus, to the extent that a patient feels his needs for autonomy, competence, and relatedness are supported in a discussion with his primary care doctor about, for example, modifying his diet to include more fruits and vegetables, the patient is likely to feel more autonomously self-regulated (i.e., more identified or integrated) around this recommended health behavior change.”

But what does this mean in practice and how can clinicians support patients in internalising health behaviours?

“…autonomy supportive behaviors include eliciting and acknowledging patients’ perspectives and emotions before making recommendations; supporting patients’ choices and initiatives; providing a rationale for advice given; providing a menu of effective (i.e., evidence-based) options for change; minimizing control and judgment; and exploring how relevant health behaviors relate to patients’ aspirations in life.”

“Competence support involves being positive that patients can succeed; reframing past failures as short successes; providing accurate effectance feedback in a non-judgmental manner; identifying barriers; skills building and problem solving; and developing a plan that is appropriately challenging to patients’ skill and experience level.”

“…relatedness support includes providing unconditional positive regard (particularly in the face of failure to achieve desired goals), being empathic with patients’ concerns, and providing a consistently warm interpersonal environment. Thus, a practitioner may support a patient’s need for relatedness by expressing understanding about how difficult making a behavior change like quitting smoking can be and reflecting the patient’s concerns about failure.”

Readers may already recognize how this model overlaps with and feeds into Motivational Interviewing. As the authors point out:

“Support for all three needs requires that clinicians are actively engaged with their clients, and that they take a client-centered approach to the interaction. For example, eliciting and acknowledging the client’s perspective starts with active listening and includes reflections (e.g., brief summaries of the thoughts, emotions, and plans the client has about the health issue being addressed).”

Certainly, in individual counselling, this framework can be embraced by clinicians to support behaviour change in their patients.

Hat Tip to Isabel Savoie for pointing me to this paper.