Home » blog » Save Your Carbs For Dinner?

Save Your Carbs For Dinner? 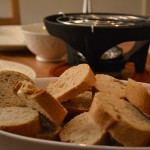 Diurnal changes in hormones and metabolism are well known and how these can be influenced by timing and sequencing of external stimuli (e.g. eating, exercise, sleep, etc.) has always been of considerable interest.

A study by Sigal Sofer and colleagues from the Hebrew University of Jerusalem, Israel, published in OBESITY, suggests that eating most of your carbs at dinner may have beneficial effects on hormonal patterns, metabolism, and lead to more weight loss than eating a similarly calorie-restricted diet with carbs spread out throughout the day.

The rationale for the study as stated by the researchers is that:

“…consumption of carbohydrates mostly in the evening would modify the typical diurnal pattern of leptin secretion as observed in Muslim populations during Ramadan. The experimental diet induced a single daily insulin secretion in the evening, thus it was predicted that the diet would lead to higher relative concentrations of leptin starting 6–8 h later i.e., in the morning and throughout the day. This may lead to enhanced satiety during daylight hours and improve dietary adherence.”

“Studies have shown that there is a negative correlation between insulin and adiponectin levels. Since the experimental diet used in this study reduces insulin secretion during the day, it was also hypothesized that adiponectin concentrations would increase throughout the day improving insulin resistance, diminishing symptoms of the metabolic syndrome and lowering inflammatory markers.”

A total of 78 male subjects (policemen) with a BMI greater than 30 were randomized to 6 months of 1,300–1,500 kcal/day diets, with either the carbs served mostly at dinner (test) or throughout the day (control).

Subjects eating their carbs in the evenings lost more weight (11.6 vs. 9.06 kg) and had lower hunger scores as well as greater improvements in fasting glucose, average daily insulin concentrations, and insulin-resistance.

There were also greater improvements in lipid profiles, CRP, and other relevant markers in the intervention group.

While leptin levels dropped in both groups (not surprising given the weight loss), the leptin decrease was less in the late-carb-eaters than in the control group, and adiponectin levels increased significantly only in the intervention group. The authors suggest that these hormonal changes may perhaps explain the improved metabolic control and lower hunger scores in this group.

However, the authors are also careful to point out that:

“Further research is required to confirm and clarify the mechanisms by which this relatively simple diet approach enhances satiety, leads to better anthropometric outcomes, and achieves improved metabolic response, compared to a more conventional dietary approach.”

They certainly have my attention.