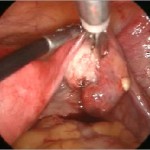 Earlier this week I posted on a couple of new articles describing technical complications of laparoscopic adjustable gastric banding (LABG) and how some patients, who fail LABG, may benefit from conversion to Roux-en-Y Gastric Bypass (RYGBP).

These postings prompted a number of responses from surgeons around the country, including one from Christopher Cobourn (Toronto), who drew my attention to two publications in which LABG were used to salvage patients who had failed on RYGBP.

In the first paper, published in Surgical Endoscopy (2007), Ryan Gobble and colleagues from the New York University School of Medicine reported on 11 patients (7 f, 4 m), who were referred to their program for failure to lose weight or weight regain after RYGBP (six open, five laparoscopic). Vanguard bands were successfully placed laparoscopically in 10 patients (one was converted to open) with a mean OR time of 76 mins. While there were no complications or mortalities, one patient required reoperation for a flipped port. Based on the weight loss observed over a median of 13 months, the authors concluded that LAGB is a safe and effective solution to failed RYGBP.

Thus, not only (as reported previously) can RYGBP be used to salvage patients who fail on LABG, but, as illustrated by these reports, the opposite is also true.

Overall, this discussion shows that bariatric surgery is a complicated business, with no procedure being perfect and that a certain proportion of patients undergoing any of the current procedures is likely to fail and require conversion to another option.

Together, these reports reinforce what I have said before: patients undergoing any bariatric procedure should be warned of potential failure and the possible need for reoperation and conversion if things don’t go as planned.

Clearly, these reports also reinforce the notion that bariatric surgeons need the versatility of not only performing the primary procedure but should be comfortable offering revisional surgery when necessary.

Obviously, these “technical” discussions should not distract from the fact that long-term patient outcomes may be as, if not more, dependent on patient selection, preparation and life-long follow up, as on the specific procedure. No matter how good the surgery, when done In the wrong patient or setting – long-term results are likely to always be disappointing.

Hat tip to Dr. Cobourn for bringing these papers to my attention!