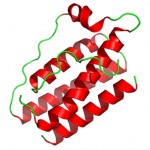 So far leptin has not fulfilled its promise as a treatment for common “garden-variety” obesity, because most obese people seem resistant to the “appetite suppressant” effect of this protein. In fact, most obese individuals have too much rather than too little leptin in their blood stream. If we can only understand what is causing this leptin resistance, we may be able counteract this problem by “sensitizing” the leptinergic system to leptin’s weight-loss effect.

According to a study by Lale Ozcan and colleagues from Harvard Medical School, just out in Cell Metabolism, we may now be one step closer to finding a solution to this problem.

In their studies they show that the molecular mechanism underlying leptin resistance in obese mice may be due to increased endoplasmic reticulum (ER) stress and activation of the unfolded protein response (UPR) in the hypothalamus. ER stress occurs, when processing of proteins in the ER malfunctions, thereby triggering the UPR cascade which leads to the increased production of molecular chaperones that help with protein processing.

Specifically, Ozcan and colleagues first show that mice genetically prone to ER stress in their neurons have severe leptin resistance and are prone to weight gain despite very high levels of circulating leptin. They then show that leptin sensitivity can be restored by treating the animals with the chemical chaperones 4-phenyl butyric acid (4-PBA) and tauroursodeoxycholic acid (TUDCA). Not only does treatment with these agents appear to restore leptin response and reduce body weight, but these agents in fact dramatically increase response to exogenous leptin.

The remarkable point in this observation is that both 4-PBA and TUDCA are already known to be safe in humans and are FDA-approved for clinical use: 4-PBA is used in urea cycle disorders and in cystic fibrosis; TUDCA has been used for centuries in traditional Chinese medicine and is currently used in some liver diseases. Both agents are also under study for use in neurologic disorders such as Alzheimer’s and Huntington’s disease.

Thus, this observation may very quickly lead to novel obesity treatments in individuals with leptin resistance, i.e. the majority of people with excess weight. Of course, studies in obese patients have yet to be performed and only time will tell how effective this approach will really be.

While we keep our fingers crossed, moderate optimism appears warranted.