Is FTO the Junk-Food Gene? 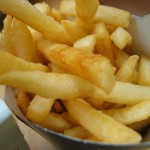 Regular readers of my blog will by now be familiar with my “Six Natural Laws of Weight Gain” (the title of the best seller that I will hopefully one day write).  I have argued that these laws are nothing less than a finely tuned genetic program for survival – in today’s obesogenic environment – a perfect prescription for weight gain.

Now, while I fully recognize that such a complex genetic program is not determined by any single gene, but rather, is the result of 100s if not 1000s of genes working in concert while interacting with the environment – I am also confident that occasionally we will find a gene that plays an important role in these processes.

According to a paper by Joanne Cecil and colleagues from the University of Dundee, Scotland, published in this week’s New England Journal of Medicine, the FTO gene may just be such a candidate.

As some readers may know, the FTO gene has so far shown the most robust associations with common obesity. This well-conserved gene, whose ancestors are over 450 million years old (found in fish and chicken), is abundantly present in feeding-related nuclei of the mammalian brainstem and hypothalamus, where it is significantly up-regulated after 48-h of food deprivation. It is therefore fair to assume that the FTO plays a role in the central control of energy homeostasis (see Fredriksson et al. for details).

In the present study, Cecil and colleagues first confirmed the relationship between the FTO gene (the “A” allele of variant rs9939609 to be precise) and increased weight in 2726 Scottish children, 4 to 10 years of age.

They then extensively characterized a subset of 97 children with and without the relevant genetic FTO variant for body composition, energy expenditure and food intake. To make a long story short, while the A allele was associated with increased body fat, this increase was not accounted for by decreased energy expenditure. Kids with the A allele also did not eat more food, however, by making the “wrong” choices, they ended up eating significantly more calories.

Thus, this gene appears to affect body weight by promoting “poor” food choices or in other words, a preference for energy-dense foods.

Reader of my blog will immediately recognize this as a candidate gene for Natural Law #2: “Always go for the gravy”.

While many (including Columbia University’s Rudolph Leibel in an accompanying editorial) will suggest that all that carriers of this gene will need to do is make healthier lifestyle “choices”, the real point here is that we are obviously not all made equal in terms of our “resistance” to energy-dense foods.

Thus, while some of us obviously have no problem “passing the gravy” others may have a much harder time resisting and may in fact be unconsciously draw to exactly the high-energy-density junk foods that allow them to pack on the pounds.

Remember, just a few weeks ago, I blogged about the brain imaging studies that suggested that some people may simply need more chocolate to get the same level of stimulation of their “reward centres” than others.

Based on these recent studies, anyone who still believes that simply saying “no” to crappy foods is as easy for one person as it is for the next, simply does not understand the complexity of how our genetics interact with our environment.

It seems that perhaps people who couldn’t care less for junk food are not really “smarter” than those who love it – I guess they simply don’t have the “junk-food” gene.