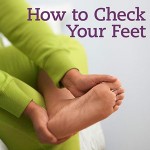 This ‘paradox’ has been demonstrated for a wide range of conditions including cancers, heart failure, kidney disease, and chronic obstructive lung disease.

A new disorder that can apparently added to this growing list of conditions, where obesity seems to be of benefit, is the risk for foot amputations in younger diabetic men.

Thus, according to a study by Sohn and colleagues from Northwestern University Chicago, just published in OBESITY, the risk for amputation-free survival in diabetic men younger than 65 treated in the US Department of Veterans Affairs Healthcare System in 2003 were higher for patients with BMI <25 and lower for those with BMI ≥30 compared to overweight individuals (BMI 25-29.9).

In fact, individuals with BMI ≥40 were only half as likely to experience any major amputations during the 5-year follow-up as overweight individuals.

While the researchers do not offer any plausible reasons for this paradox, it is another remarkable finding that suggest that while being obese may increase your risk for many chronic diseases (including diabetes), once you have them, being obese may actually not be all that bad for you (at least compared to being skinny).