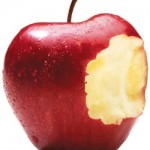 Continuing in this series of obesity myths in the New England Journal of Medicine paper, I am not even sure why the authors thought this myth important enough to include.

Frankly, I was not even aware that this “myth” existed – perhaps, because even the premise of this myth seems so ridiculous.

According to the authors, Obesity Myth #7 states that,

“A bout of sexual activity burns 100 to 300 kcal for each person involved.”

Anyone, who has ever tried burning 300 calories on a treadmill will realise that sexual activity (at least for most people) comes nowhere close to that kind of exertion.

“Given that the average bout of sexual activity lasts about 6 minutes, a man in his early-to-mid 30s might expend approximately 21 kcal during sexual intercourse.”

This, the authors calculate, is only about 14 Cal more than he would have spent watching 6 mins of TV.

Or, approximately the number of calories you’d get by biting into an apple – go figure!

I wonder what dispelling this myth does for tackling the obesity problem – except perhaps to illustrate the point that we generally overestimate the calories burnt with physical activity.