Home » blog » Electrical Stimulation of the Colon Can Suppress Appetite

Electrical Stimulation of the Colon Can Suppress Appetite 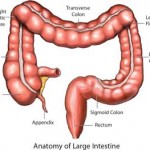 The idea of using electrical stimulation to affect gastric motility and emptying as a means to increase satiety and reduce appetite has received a considerable amount of attention.

This idea is based on the finding that key hormones and neuronal signals that affect gastric motility and satiety (e.g. PYY-36) are in fact released by the colon.

In this pilot study, Hanaa Sallam and Jiande Chen from the University of Texas, Galveston, examined the effect of colonic electrical stimulation (CES) using implanted electrodes in dogs and found (compared to sham-stimulation) that CES delayed gastric emptying of solids by 77%, reduced intestinal contractility, and resulted in a 60% reduction in food intake.

The fact that this response was partially inhibited by guanethidine (an autonomic ganglion blocker) suggests a role for the autonomic nervous system in mediating this effect. In fact, CES decreased vagal activity in both fasting and fed states, increased the sympathovagal balance and marginally increased sympathetic activity in the fasting state.

While these findings do suggest that the colon may prove a novel target for efforts to use electrical stimulation to treat obesity (remember, electronic pacemakers are now routinely used on a number of other organs in medical practice), it will certainly take a lot more research before this may indeed be considered an actual treatment option for obesity.

In particular, one would like to certainly better understand exactly how colonic electrical stimulation produces this profound effect on appetite and food intake and that this acute effect continues to be active with prolonged stimulation.

Nevertheless, the results do point to the fact that the colon can potentially play an important role as a target organ in the treatment of obesity.