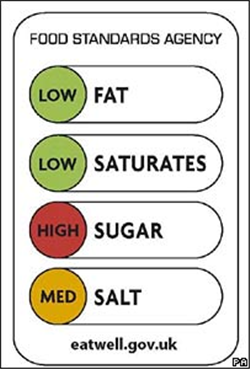 Two of the most commonly proposed population-wide measures to prevent and reduce the health burden of obesity are a simple front-of-package food label (green-yellow-red) and the taxation of junk foods.

But would such measures truly be cost effective?

This question was now addressed by Sacks and colleagues from Deakin University, Melbourne, Victoria, Australia, who modeled the cost effectiveness of ‘traffic-light’ nutrition labelling and ‘junk-food’ tax in a paper just published in the International Journal of Obesity.

For traffic-light labelling, the researchers estimated changes in energy intake based on an assumed 10% shift in consumption towards healthier options in four food categories (breakfast cereals, pastries, sausages and preprepared meals) in 10% of adults.

For the ‘junk-food’ tax, price elasticities were used to estimate a change in energy intake in response to a 10% price increase in seven food categories (including soft drinks, confectionery and snack foods).

The authors concluded that despite cost outlays of AUD 81 million for traffic-light labeling and AUD 18 million for ‘junk-food’ tax, both interventions would be cost-effective and excellent ‘value for money’.

Obviously, this would be great, if indeed the underlying assumptions were correct.

Interestingly, however, the same authors, in a previous study, found virtually no effect of traffic-light-labeling on driving UK consumers to make healthier choices. Regular readers may also recall previous posts on the rather small effects of taxing sodas or other “unhealthy” foods.

This is not to say that population-wide measures to prevent or reduce the burden of obesity, if found effective, should not implemented.

However, we must also remember that any such measures, even if effective in reducing the average weight of the population by a few kilos, will still leave the millions already struggling with obesity in want of treatments.