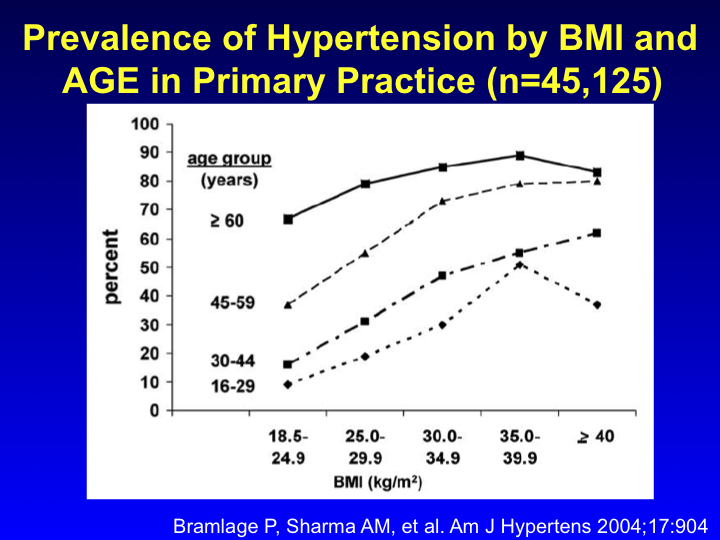 Yesterday, the Heart and Stroke Foundation of Canada released a report titled “A Perfect Storm” in which they present an alarming increase in hypertension and other cardiovascular risk factors in young adults.

Why, given these obesity numbers, does this increase in hypertension not surprise me in the least?

Because, as someone who has extensively worked on the relationship between excess weight and blood pressure, I am only all too familiar with the profound effect that overweight and obesity can have on blood pressure – especially in the young!

Thus, as we reported in a paper that was published back in 2004 in the American Journal of Hypertension, overweight and obesity are indeed the primary drivers of hypertension in the young.

In this cross-sectional study of 45,125 unselected consecutive primary care attendees in a representative nationwide sample of 1912 primary care physicians in Germany, we not only found that blood pressure levels were consistently higher in obese patients (increasing from 34.3% in normal weight to 60.6% in overweight, and well over 70% in obese individuals), but that this increase was also associated with markedly poorer blood pressure control rates (odds-ratio for good blood pressure control in diagnosed and treated patients was 0.8 in overweight and as low as 0.5 in obese patients).

However, even more relevant to yesterday’s report, was the clear finding that the younger the patients, the greater the impact of excess weight on their blood pressure.

As seen in the figure (click figure to enlarge), while in patients older than 60 years, there was little impact of BMI class on hypertension prevalence, in younger patients, there was a steep and consistent increase in hypertension rates with increasing BMI.

This is not surprising, when we look at the pathophysiology of hypertension, which in older individuals is driven almost entirely by stiffening of arteries and an increase in peripheral resistance (or in other words “aging”), while in younger individuals hypertension is driven mainly by the increased sympathetic activity, volume expansion, and increased cardiac output typically associated with excess weight.

Let us not forget that the prevalence of diabetes in the young (over 66,000 in 20-30 year olds and over 130,000 in 35-44 year olds according to the report) is also virtually entirely driven by overweight and obesity.

If all of this is not enough to get us to focus all our efforts on preventing and treating overweight and obesity, I don’t know what is.

If we want to prevent hypertension and diabetes in the young, we need to prevent overweight and obesity.

If we want to treat hypertension and diabetes in the young, we need to treat overweight and obesity.

It is that simple!