Home » blog » Obesity Does Not Increase Mortality in Gastric Cancer

Obesity Does Not Increase Mortality in Gastric Cancer 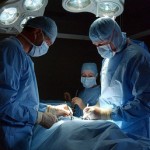 One of the consistent findings in the medical literature is the fact that although excess weight is associated with an increased risk for a wide range of medical problems (including the earlier onset of such complications), once people have these problems, excess weight appears to be either ‘protective’ (the so-called obesity ‘paradox’) or have little influence on long-term outcomes.

Thus, a study by Kai Bickenback and colleagues from the Memorial Sloan-Kettering Cancer Center, New York, NY, published in the Annals of Surgical Oncology, failed to find an impact of obesity on long-term survival of patients with gastric (stomach) cancer.

In their study, the researchers examined dat from about 1,800 patients who underwent curative intent resection for gastric carcinoma from 1985 to 2007.

Overall, there was no difference in survival between overweight or obese and normal weight patients.

However, overweight patients did have more proximal tumors and a lower tumor (T) stage at surgery.

Overweight and obese patients also had about twice the rate of wound infections and anastomic leaks than normal weight patients.

In multivariate logistic regression analyses, higher BMI, total gastrectomy, and use of neoadjuvant chemotherapy were all associated with increased wound infection and anastomotic leaks.

Thus, the authors note that although peri-operative complications may be more common in overweight and obese patients undergoing surgery for gastric cancer, their survival rates are no worse than those of normal weight individuals.

Obviously, given the higher peri-operative complication rates, costs for hospital stay and doctor visits may be higher in the overweight and obese patients (not analysed in this paper) – however, this should certainly not prove a barrier to providing the same care to overweight and obese patients with gastric cancer as one would to normal-weight individuals with this unfortunate condition.