Does Globalisation Lead to Obesities? 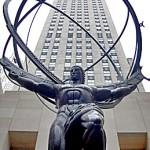 Stress, anxiety, sleep deprivation, and other common sequelae of modernisation have been shown to disrupt ingestive behaviour often promoting hyperphagia and affecting metabolism in ways that would promote accumulation of excess fat.

In a paper just published in Obesity Reviews by Lysa Huneault and colleagues from Laval University, Quebec City, Canada, the authors argue that modernisation and globalisation may account for the substantial increase in people with obesities around the world.

Following a brief discussion of the role of stress hormones in weight gain, and the little known fact that removal of the adrenal gland (a major source of stress hormones) protects animals from becoming obese, the authors argue that

According to their hypothesis, the increase in knowledge-based work (rather than traditional physical exertion in manual labour), and the decrease of quality and duration of sleep both induce an increase in stress hormones like cortisol, which can lead to an increase in food intake, a reduction in energy expenditure and body fat gain.

The authors argue that:

“from a socioeconomic perspective, globalization leads every nation of the world in conflict with itself and may consequently represent a real problem. On one hand, there are preoccupations related to productivity and money making. On the other hand, people have to adopt a daily lifestyle leading to hyperphagia and decreased energy expenditure in order to maintain their economic competitiveness.”

While this is certainly a most entertaining and stimulating discussion, the article of course cannot belie the fact that obesities were around well before globalisation, often affecting those that were well-off and comfortable rather than those who would have experienced the daily stress of simply making ends meet.

Of course, one may also argue that the latter would have readily gained weight had they had access to cheap, everpresent, highly palatable, calorie-dense foods as in our current environment (which undeniably is indeed a consequence of modernisation and globalisation).

Certainly, this article puts into perspective the rather complex ecological and macroeconomical factors that can interact with human biology to overwhelm hemeostatic functions that evolved to ensure survival under very different circumstances – concept that was nicely summarized in the Foresight Map.

Recognition of these factors certainly pose important challenges for public health endeavours that focus on attempting to change individual behaviours, which represent but natural and normal responses to an unnatural and obesogenic environment.

As Angelo Temblay, the senior author of this paper once said:

“Managing obesity is so challenging because it requires adopting unnatural behaviours to counteract an unnatural environment.”

Huneault L, Mathieu ME, & Tremblay A (2011). Globalization and modernization: an obesogenic combination. Obesity reviews : an official journal of the International Association for the Study of Obesity PMID: 21366834