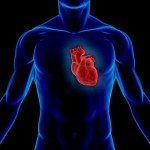 As some readers may be aware, the heart, apart from simply pumping blood through our arteries, also secretes hormones called natriuretic peptides, which play an important role in regulating blood volume. Natriuretic peptide levels tend to be markedly increased in patients with heart failure.

Now, a study by Marica Bordicchiia and colleagues, from the Sanford-Burnham Medical Research Institute, Orlando, Florida, published in the Journal of Clinical Investigation suggests that this hormone may also markedly affect the formation and function of brown fat.

As readers will recall, brown fat is an important determinant of caloric expenditure – a couple of ounces of this tissue can account for almost 20% of resting metabolic rate and therefore, not having enough of this tissue has been implicated as a risk factor for weight gain.

In their study, Bordicchia and colleagues not only show that cultured human adipocytes exposed to atrial NP (ANP) and ventricular NP (BNP) not only grew more mitochondria but also showed increased expression of uncoupling protein (UCP1) with increased uncoupled and total respiration.

Additional studies in mice showed that infusion of BNP into mice robustly increased UCP1 expression in both white and brown fat, with corresponding elevation of respiration and energy expenditure.

Together these findings suggest an unrecognized role of there heart hormones in the regulation of caloric expenditure by promoting the “browning” of white adipocytes to increase energy expenditure.

The authors point out that their discovery may point to a new explanation for the weight loss often associated with severe heart failure often referred to as ‘cardiac cachexia’.

In addition, as brown fat represents a natural ‘defence mechanism’ to obesity, it will be interesting to see how this hormonal pathway can perhaps be harnessed to prevent or treat obesity in humans.