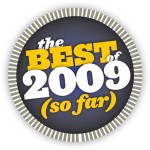 As 2009 is rapidly coming to a close, here are a selection of what may have been my most memorable posts of 2009:

March: Have Diabetes? Find a Surgeon!

July: Saying “I Do” Promotes Obesity

September: Why Weight Loss and Obesity Management Are Not the Same

Obviously, this is just a selection, admittedly a personally biased one.

Appreciate any comments on what you liked best or enjoyed the most.