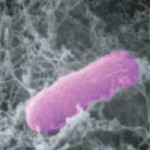 As regular readers are well aware, there is currently much interest in the role of the gut microbiome in obesity and related metabolic disorders.

Although there are over 1,000 different species of bacteria in the gut, one particular group of gut microbes, the methanogenic archaea (methanogens), has been specifically linked to altered metabolism and weight gain. These anaerobic organisms use hydrogen, formate, and other substrates produced by neighboring microbes to generate methane, some of which can be absorbed and used as a source of calories.

Now, a study by Ruchi Mathur and colleagues from Cedars-Sinai Medical Center, Los Angeles, published in OBESITY, suggests that eradication of a specific methane producing bug with the use of antibiotics may have favourable metabolic effects.

The study focuses on the predominant human methanogen, Methanobrevibacter smithii for which there is increasing evidence for a specific role in weight gain and the development of obesity as well as impaired glucose tolerance and altered glycemic control in people with diabetes.

Compared to their status prior to antibiotic treatment, the 8 eradicated individuals not only had significant improvements in gastrointestinal bloating, but also had a clinically significant reduction in total and LDL cholesterol as well as improvements in insulin and glucose response to an oral glucose tolerance test.

There were no differences in gastric emptying or in energy utilization.

From these findings, the authors conclude that,

“this study demonstrates for the first time that eradication of methane on breath test via antibiotic therapy results in significant improvements in total cholesterol, LDL, insulin, and glucose levels in methane-positive prediabetic subjects with obesity. These findings suggest that targeting a specific gut microbial population can have clinical benefits in this at-risk population.”

Obviously, these are still early days – not only is this a small sample size but also the durability of these effects have yet to be established. Furthermore, whether such an approach can help prevent weight gain or deliver other tangible clinical benefits remains to be seen.

Nevertheless, the use of antibiotics to target gut bugs as a means to change metabolism is truly novel and may well be an early herald of things to come.