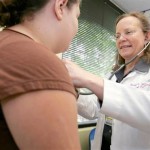 Continuing the theme of harmful effects of weight bias, a paper by Janine Beekman and colleagues published in Psychology & Health, suggests that providing patients information on the strong genetic nature of obesity may not only reduce perceived weight bias but also increase willingness to eat a healthier diet.

In this study 201 women with overweight or obesity aged 20-50 were allowed to interact with a virtual physician in a simulated clinical primary care environment, which included physician-delivered information that emphasized either genomic or behavioral underpinnings of weight and weight loss.

This research builds on previous evidence that provision of genomic information in a primary care context can reduce patients’ perceived stigma because they feel less blamed for their weight.

“This relates to attribution theory, which posits that causal attributions play an important role in determining reactions to stigmatizing information. The more overweight is attributed to controllable causes (like diet and exercise), the more negative one’s reactions are to it.”

All aspects of the virtual encounter were identical except for the type of information given: Participants who received genomic information were told that body weight has a sizeable heritable component, and this may be relevant to their personal situation. Participants who received behavioral information were given a parallel message that it may be harder for those who are already overweight to lose weight (but with no mention of the role of genomics). Both groups were reminded of the importance of health-promoting behaviours related to physical activity and nutrition.

These findings may not just have implications for clinical practice but also for public health messages about obesity:

“The proliferation of the “war on obesity” and social messages targeted at combating obesity are an attempt to tackle a public health problem by engaging stigma as a vehicle for social control, while stigmatizing individuals in the process. These messages, in turn, can lead self-perceived overweight women to, for example, consume more calories and feel more deflated about their prospects for weight loss. The present research provides another example of these ironic effects of stigmatizing weight – or, more specifically, the manifestation of that stigma as perceived blame and discrimination.”

Thus, for clinicians, the message may well be that acknowledging the importance of genetic factors (rather than simply diet and exercise) may positively influence interpersonal dynamics between patients and providers by reducing perceived blame and perceived discrimination. These improved dynamics, may in turn, positively influence health cognitions.