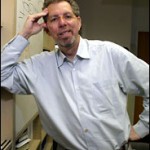 Yesterday, I had the distinct honor and privilege of introducing Jeffrey Friedman at the University of Alberta Gairdner Symposium. Anyone with even a remote interest in obesity, probably recognises Friedman as the man who, back in 1994, first reported the identification of the OB gene (later called leptin).

In my introduction, I told a cute little story about two fat mice (alluding to the parabiosis experiments of Doug Coleman), that ultimately led to the discovery of leptin and the recognition that adipose tissue is more than just an inert storage organ for excess fat – it is in fact very much an endocrine organ in its own right.

As Friedman explained in his talk, leptin is simply (one of) nature’s ways of counting calories. When caloric stores (read “fat”) deplete, leptin levels decrease, thereby stimulating food intake to bring weight back to “normal” (exactly the kind of weight regain that frustrates dieters).

In contrast, when fat stores increase, leptin levels go up, thereby reducing food intake to bring caloric stores back to wherever the hypothalamus thinks they should be – i.e. unless you have leptin “resistance”, where the elevated leptin levels fail to suppress ingestive behaviour.

Unfortunately, the latter is the case in the vast majority of people with excess weight, which is the reason why leptin failed as the “magic bullet” against garden-variety obesity (though it works great if you happen to belong to the handful of people with obesity, who do have leptin deficiency).

Surprisingly, the clinical use of leptin appears far more successful in cases, where there is a lack of fat tissue (called lipodystrophy). This paucity of fat can be found in rare genetic syndromes, but, more commonly, also in HIV patients undergoing antiretroviral therapy, as well as women who are anorectic or run marathons. In these individuals, substitution of leptin can lead to remarkable improvements in metabolism and reproductive health. It has also been used to restore periods in women with hypothalamic amenorrhoea and appears to have insulin-like effects on glucose homeostasis.

Recently though, leptin’s role for obesity is being reassessed. It turns out that in combination with amylin (pramlintide) it can in fact produce quite remarkable weight loss (see Roth et al. PNAS 2008).

So there may still be some hope for novel obesity treatments based on leptin.

In any case, fascinating lecture – especially liked the pictures of mice with “glowing” fat tissue as a result of pairing the leptin gene with luciferase.

No doubt, the discovery of leptin was a milestone in obesity research and heralded in the Modern Era of Obesity biology.