Home » blog » How Big a Problem is Obesity in Canada?

How Big a Problem is Obesity in Canada? 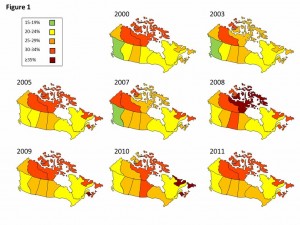 Last week saw the release of the latest update of the Canadian Obesity Maps by Carolyn Gotay and colleagues published in the Canadian Journal of Public Health.

As expected, the numbers are not looking good: over the past 11 years the estimated prevalence of obesity across Canada has continued to increase with current rates exceeding 30% in the Maritime provinces (Newfoundland, New Brunswick, Nova Scotia, Prince Edward Island) and in two territories (Northwest Territory, Nunavut).

High as these numbers may seem, they both over and underestimate the size of the problem.

Overestimate, because not everyone, who’s BMI happens to be over 30 is necessarily to be deemed “ill”, even if their risk for some comorbidities may be statistically higher than that of someone at lower weight. As our work on the Edmonton Obesity Staging System has shown, this groups of “low-risk” obese folks may well be about 20% of the “obese” population – especially in the BMI 30-35 range.

Underestimate, because health problems attributable to excess body weight and amenable to weight loss may well be present in almost 50% of people, who do not fall into the “obese” category represented on these maps.

Thus, for many Canadians, health problems, that can be traced directly to increased body fat (particularly “ectopic” belly fat), begin with the deposition of a few extra pounds – well before they even reach the BMI cutoff for obesity.

As noted in a previous post, I would need to gain about 75 pounds to reach a BMI of 35, by which time, I would expect to not only have severe hypertension, type 2 diabetes, fatty liver disease, gastro-esophageal reflux and most likely sleep apnea (I certainly carry the genes for all of these conditions).

I am by no means alone here – there are countless people with BMI’s well below 30, who have weight-related health problems, and stand to benefit from losing even a modest amount of weight and keeping it off.

Unfortunately, our current definition of obesity based on BMI means that we will be overtreating some (or at least be telling many to lose weight when they have little to gain from losing), while missing a substantial proportion of the “non-obese” population, who should probably be worrying about their weight.

So, while the obesity maps certainly tell us that obesity is still on the rise and most likely not going anywhere soon, we should look at these numbers as merely the tip of the iceberg as far as weight-related health problems go.

As regular readers will know, there is no easy way to determine whether or not your weight (even below the BMI cutoff of 30) is affecting your health – this will take a visit to your health professional to find out.

Simply stepping on a scale is simply not enough information to determine whether you are too heavy for your hight – if only things were that easy.

p.s. This is a topic certainly due to be intensely debated at the upcoming Canadian Obesity Summit, May 1-4, Vancouver.