Hormonal Responses to Food Intake Begin in Your Mouth 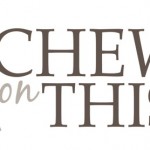 In my current show at the 33rd Edmonton International Fringe Theatre Festival, I joke about the importance of chewing your food. This has classically been noted to be of importance to allow the enzymes in saliva to begin the process of digestion.

However, now a fascinating study by Yong Zhu and colleagues from Iowa State University, published in Physiology and Behaviour shows that chewing prompts hormonal changes that vary based on the composition of the food.

In their study, ten healthy males volunteers underwent a sham-feeding experiments (you chew but do not swallow your food) after an overnight fast with 3-min chewing of water, high-fat (nuts), high-carbohydrate (cereal) or high-protein (cheese) food provided in a randomized order (on four separate occasions).

The authors attribute these changes in part to neuronal signals transmitted through the vagal nerve, which can for e.g. stimulate glucagon release, thereby explaining the observed increase in plasma glucose levels after all foods.

This study shows that short-term oral exposure to different foods can result in metabolic and hormonal changes that are partly dependent on diet composition.

If nothing else, this study points to the fact that chewing is not simply about mechanically preparing food for swallowing – it is far more a process that puts the organism into a nutritive state with distinct metabolic and hormonal changes.