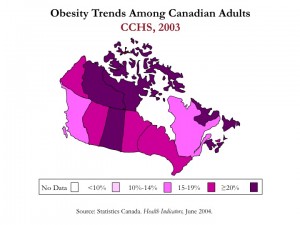 Upon my arrival in Canada to take on the position of Canada Research Chair (Tier 1) in Cardiovascular Obesity Research and Management at McMaster University in 2002, I needed to familiarize myself with the Canadian obesity research community.

This is why, in a paper published in Obesity Research, we undertook a systematic look at all of the Canadian published obesity research since 1970.

Of the articles, 816 were considered original studies and accepted for our analysis.

From this analysis, we concluded that,

“Given the multifactorial nature of obesity, Canadian obesity research covers a broad range of areas with a predominance of basic science but lesser emphasis on community and primary care studies. Furthermore, there was a paucity of research on either clinical management of medical conditions in obese patients or clinical aspects that go beyond weight loss. Thus, although Canada appears well represented in basic research, more attention to exploration of clinical issues and healthcare delivery for obese patients appears warranted.”

Since then much has changed – a similar search today would reveal almost 5000 papers. This means that in the decade since this analysis, Canadian have published almost four times as many studies as during the entire three previous decades (1970-2003).

Interest and growth in obesity research is also reflected in the fact that the Canadian Obesity Network now has over 2000 (out of 7500), who identify themselves as obesity researchers.

In addition, the recent Canadian Obesity Network’s Student Meeting and Bootcamps clearly illustrate the diversity and breadth of obesity research in Canada.

In the most recent competition of the Canadian Institutes for Health Research, over $22 million were awarded to obesity research just a fraction of the funding available for obesity related research in Canada (but still a low figure given the relative impact of obesity on the health of Canadian).

Clearly, Canadian researchers are significantly contributing to our understanding of obesity, its causes as well as its prevention and management.

I am proud to be part of this community.