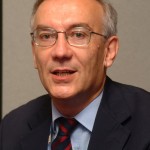 In 2001, my colleague Guido Grassi, from the Clinica Medica of the University of Milano-Bicocca (Italy) and I penned an editorial for the Journal of Hypertension, in response to a paper by Yves Allemann and colleagues, which reported 5-year follow-up data on 34 young normotensive subjects with and without family histories of hypertension, showing that those with a positive family history gained more abdominal adiposity than their counterparts.

From this observation, the authors concluded,

While both of these assumptions may well be the case, our editorial pointed out that,

“While this study by no means provides a conclusive answer to the `chicken-or-egg’ question at hand, it does demonstrate that the development of abdominal adi- pose tissue is an early event that may well precede the development of overt hypertension in genetically prone individuals.”

We also noted that,

Regarding the possible biological mechanisms that may link hypertension to abdominal obesity (or vice versa), we discussed several of the possibilities based on what was known at the time:

“Factors that have been im-plicated in the development of the metabolic syndrome range from a dysregulated response of the hypothalamic-pituitary axis, to low birthweight, or the `thrifty-gene hypothesis’, whereby in all cases the underlying molecular mechanisms remain elusive.

Another common denominator may be an increase in sympathetic activity, a fnding commonly associated with central obesity, increased forearm vascular resistance, insulin resistance and other aspects of the metabolic syndrome. This possibility is supported (although indirectly) by data showing that the association between obesity and hypertension triggers a sympathetic activation greater in magnitude than that found in either of the above-mentioned abnormal conditions alone. More recent evidence also indicates the direct involvement of adipose tissue-derived factors such as leptin or other vasoactive substances in the development of obesity-related hypertension.”

Since the publication of this editorial much work has been done to further elucidate these mechanisms and it is now largely accepted that increased sympathetic activity, perhaps as a consequence of elevated leptin levels, may be a key pathogenic factor in obesity related hypertension. Nevertheless, all of the mechanisms discussed above (and perhaps some that have yet to be discovered) are probably also involved.

According to Google Scholar, this editorial has been cited 16 times.