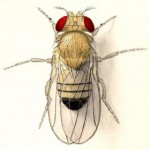 Regular readers of this blog will recall my previous comments on Gov. Palin’s remark regarding the considerable waste of public money on studying the fruit fly (drosophila melanogaster).

As a case in point – today a story on how fruit fly research helped identify a key gene for lipid metabolism in humans. The work, by Chao-Qiang Lai and colleagues from Tufts University, Boston, MA, USA. published in this month’s issue of OBESITY, is actually about a gene called WDTC1, which happens to be the ortholog of the drosophila adp gene, a key gene in fat metabolism. Flies and mice that lack this gene have increased fat storage and appear starvation resistant and less active, whereas overexpression of this gene leads to lean metabolically healthy animals.

In their genetic analyses of around 2000 adults of two ethnically diverse US populations, two WDTC1 SNPs were strongly associated with obesity with homozygote and heterozygote carriers of the major allele i22835A, representing ~96% of the population, having significantly higher mean BMI (around 31) than noncarriers (around 28.6). Conversely, homozygotes of the minor allele i22835G were leaner and were 74% less likely to be overweight or obese compared to homozygote carriers of the major allele.

Interestingly, there appeared to be a strong interaction of monounsaturated fatty acid (MUFA) intake and genotpype, in that with higher MUFA intake, minor allele carriers of SNP i22835A>G had higher BMIs, whereas major allele carriers had lower BMIs.

Based on their analyses, the authors suggest that the i22835A allele may represent the ancestral “thrifty genotype” that would have conferred resistance to starvation during times of famine, but today contribute to obesity.

But once again, although exciting, the interpretation and clinical utility of these findings is limited. Firstly, there is substantial heterogeneity in the association of these genetic variants and obesity in the two sample populations; also the interaction with MUFA was found in one population but not in the other.

Thus, while this study certainly strongly suggests that the WDTC1 plays a role in human fat metabolism and obesity, we are still far from developing a genetic test or a new treatment for obesity. Much remains to be done before such findings can be one day turned into better prevention or treatment.