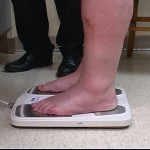 OK, so perhaps some readers are now confused. Earlier this year, I pointed out that weight is not a great measure of health (in fact, I called it just a number on a scale) – earlier this week, on the other hand, I recommended offering monthly “weigh-ins” to your patients as a means to help them control their weight.

So I guess some clarification on this issue would be in order:

Yes, weight is just a number on your scale and not the most reliable measure of your patient’s health (neither is BMI).

On the other hand, if excess weight is really threatening or affecting your patient’s health (my definition of obesity) and you do embark on obesity treatment, then obviously weight is an important measure of whether or not your treatment is actually working.

So does regular weighing help people manage their weight?

I guess the definitive study on this issue is probably the one by Rena Wing and colleagues from the Brown Medical School, Providence, RI, USA, who reported in the New England Journal of Medicine 2006 that over an 18-month observation period, in patients who on average had lost around 19 Kg, daily self-weighing was associated with a decreased risk of regaining 2.3 kg or more, particularly when delivered face to face.

So not only is regular weighing helpful in preventing weight regain, but in a separate study, Wing and colleagues demonstrated that daily weighing had no adverse effects but rather increased dietary restraint, decreased disinhibition, and decreased depressive symptoms. (Journal of Consulting and Clinical Psychology 2007)

Despite these studies, personally, I think that for some people, daily weighing may be a tad too frequent. As pointed on by Yoni Freedhoff on his blog Weighty Matters, which discussed Wing’s NEJM study, when it first appeared:

“The fact is that weight fluctuates quite dramatically due to water retention, constipation and clothing and therefore daily weighing can at times be incredibly demoralizing as you might feel you’re doing everything right and the scale shows you’re up in weight.

I usually recommend that during weight loss, weigh once weekly, stark naked, Wednesday mornings (so as to provide a buffer from the weekend), and while I still don’t know who’s the chicken and who’s the egg with daily weights during maintenance, I do recommend to my patients that once they’ve stopped losing weight, stepping on the scale daily and watching the trend can be very helpful.”

In his blog, Freedhoff also warns of “scale addiction“, something that I can confirm may become a problem in some patients.

I therefore think that weekly weigh ins by the patient (during weight loss), daily weigh ins (during the maintenance phase) and monthly weigh ins with the health care provider (during all of the above) is a safe middle ground that is probably helpful in keeping your patient on track.