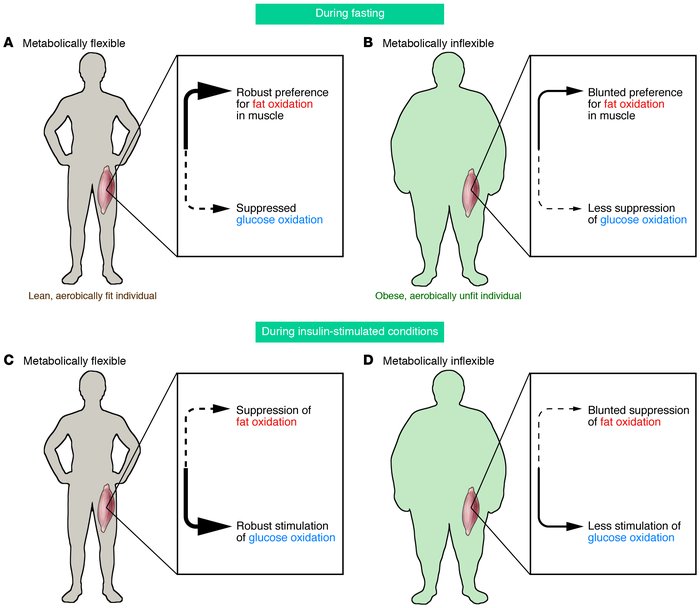 Yesterday, as part of the kickoff of Live Right Now, CBC News published an extensive interview with me on why obesity is not simply a matter of “lifestyle choice”. As I point out in the the interview, “There’s a huge variability in how people can cope with extra calories…”

Indeed, we have long known that people differ in their natural abilities to deal with caloric excess (or restriction) and that in some people metabolic and behavioural adaptations to changes in caloric intake can compensate for well over 500 calories a day with almost no change in body weight.

But there are not only differences in how the bodies deal with caloric excess – as blogged before, there are also important differences between individuals in the processing of and adaptations to changes in macronutrient composition of the diet.

This is, once again, demonstrated in a study by Kristen Boyle and colleagues from East Carolina University, just published online in the Journal of Clinical Endocrinology and Metabolism.

Based on the previous finding that lean individuals, in contrast to individuals with obesity, can increase whole body fat oxidation in response to a high-fat diet, the researchers examined the effect of increasing dietary fat intake on genes that regulate fat oxidation in skeletal muscle in both lean and obese insulin-resistant individuals.

A total of 12 lean (mean BMI = 22) and 10 obese (mean BMI = 40) individuals were studied before and after five days of a standardised high-fat diet.

While in lean individuals, skeletal muscle biopsies showed clear increases in the expression of genes for several key mediators of fat oxidation (e.g. pyruvate dehydrogenase kinase 4, uncoupling protein 3, PPARα, and PPARγ coactivator-1α), the expression of these genes remained unchanged or decreased in the obese participants.

Thus, this study shows a differential response to a lipid stimulus in the skeletal muscle of lean and insulin resistant obese humans.

Nevertheless, the study does support the notion that there is considerable variability in how people respond to changes in diet composition.

Perhaps these variations in metabolic response explain some of the controversy that I often hear from my patients (and as comments on this blog) – while some people swear that reducing carbs was the key to their success, others are convinced that their weight loss resulted largely from reducing their fat intake.

As I have said before, no single dietary strategy works for everyone and finding the right approach that works best for you or your patient may require some experimentation.

In weight management one size simply does not fit all!