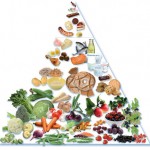 During my current visit to speak at the Icelandic Medical Association Annual Conference and meet with policy makers, my hosts are doing a wonderful job of introducing me to their “Nordic” fare consisting largely of fish, rye bread and other local produce.

Reason enough to post on this recent article by Marjukka Kolehmainen and her team of Scandinavian colleagues, published in the American Journal of Clinical Nutrition, which examines the effects of a Nordic diet on the expression of inflammatory markers in adipose tissue of individuals with the metabolic syndrome.

Participants in this 18-24 week study were randomised to either a Nordic or control diet in the SYSDIET study, whereby participants for this “substudy” were selected from centres in Kuopio, Lund and Oulo. Importantly, subjects chosen for this analysis were relatively weight stable, having lost or gained less than 5% of their body weight during the course of the study.

In accordance with recommendations for a healthy Nordic diet, subjects in the intervention group were counselled to increase their consumption of whole-grain products, berries, fruits and vegetables, rapeseed oil, have three fish meals per week, and chose low-fat dairy products, while avoiding sugar-sweetened products. In contrast, the control group was advised to consume low-fiber cereal products and dairy fat–based spreads while limiting their fish intake to that generally consumed by the average Nordic population.

Gene expression studies were performed in biopsies from subcutaneous fat tissue and showed differential expression of about 130 genes between the two dietary groups – most of which were related to pathways involved in immune and inflammatory response, including genes involved in leukocyte trafficking and macrophage recruitment (e.g., interferon regulatory factor 1, CD97), adaptive immune response (interleukin32, interleukin 6 receptor), and reactive oxygen species (neutrophil cytosolic factor 1).

Together, the analyses showed a significant reduction in many of these markers consistent with an “anti-inflammatory” effect of the Nordic diet.

As the authors point out, these beneficial effects were seen with very little or no weight loss, suggesting that they are indeed attributable to the changes in dietary intake.

These findings may well have implications for us here in Canada, where eating a “Nordic” diet with local ingredients, may well be a far better alternative than trying to emulate a “Mediterranean” diet, the green house impact of which would be anything but healthy.