Another Nail in BMI’s Coffin? 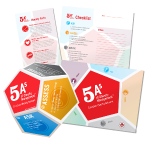 Regular readers will be well aware of the 5As of Obesity Management™ toolkit and patient resources developed by the Canadian Obesity Network.

In contrast to other existing guidelines, including the hopelessly irrelevant recent US Preventive Task Force Recommendations, the 5As of Obesity Management recommend the use of obesity stages (based on presence of risk factors, comorbidities and complications) rather than obesity class (based solely on BMI) to guide clinical decision making and interventions.

This, rather ‘bold’ recommendation is backed up by far stronger evidence than the use of BMI alone, not least through studies that have applied the Edmonton Obesity Staging System (EOSS) to several large independent datasets including NHANES and the Cooper Study, involving 10s of 1000s of participants.

And the evidence to support obesity stages is growing stronger by the minute.

Thus, in a paper by Anthony Jerant and Peter Franks from the University of California Davis School of Medicine, published in the Journal of the American Board of Family Medicine (JABFM), little, if any, relationship was found between BMI and mortality.

Based on their analysis of a population-based observational study of data from 50,994 adults aged 18 to 90 years who responded to the 2000 to 2005 Medical Expenditures Panel Surveys, 6-year survival (not adjusted for diabetes or hypertension) was only moderately (HR 1.26) increased for those with severe obesity (BMI > 35).

After adjusting for diabetes and hypertension, severe obesity was no longer associated with mortality, and milder obesity (BMI 30-<35) was even associated with decreased mortality (adjusted hazard ratio, 0.81).

Not only does this paper represent another nail in BMI’s coffin, it also further validates the concept of using a staging system to classify obesity based on actual (measured) risk and the presence of comorbidities and/or complications.

While BMI (and perhaps waist circumference) may well be simple screening tools, decision on who and when to treat should be based on obesity stage and not BMI.

Order your personal copy of the  5As of Obesity Management™ toolkit now.