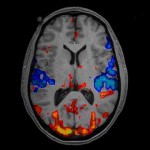 There is no doubt that living in a society in which we are constantly surrounded by highly palatable foods makes not overeating a challenge for most of us.

In their paper, the authors review the growing body of cognitive neuroscience research demonstrating the profound effect that viewing such images can have on neural activity, physiological and psychological responses, and visual attention, especially in the ‘hungry’ brain.

Beginning with a brief discussion of evolutionary aspects of vision and food, the authors remind us that,

“Foraging – the search for nutritious foods – is one of the brain’s most important functions. In humans, this activity relies primarily on vision, especially when it comes to finding those foods that we are already familiar with. In fact, it has been suggested that trichromatic colour vision may originally have developed in primates as an adaptation that facilitated the selection of more energy-rich (and likely red) fruits from in-amongst the dark green forest canopy.”

“The brain is the body’s most energy-consuming organ, accounting for somewhere in the region of 25% of blood flow, or rather, 25% of the available consumed energy. Note that this figure is even higher in the newborn human, where the brain absorbs up to two thirds of the energy that is consumed by the developing organism. As Brown notes: “In embryos, the first part of the neocortex to develop is the part which will represent the mouth and tongue…” As the brain grew in size over the course of human evolution, the demands on the visual system to efficiently locate nutrients in the environment would likely also have increased.”

This notion is not trivial given our current environmental exposure to a multitude of food images:

“Our brains learnt to enjoy seeing food, since it would likely precede consumption. The automatic reward associated with the sight of food likely meant another day of sufficient nutrients for survival, and at the same time, the physiological responses would prepare our bodies to receive that food. Our suggestion here is that the regular exposure to virtual foods nowadays, and the array of neural, physiological, and behavioural responses linked to it, might be exacerbating our physiological hunger way too often. Such visual hunger is presumably also part of the reason why various food media have become increasingly successful in this, the digital age.”

And the influence of food media is widespread:

“Every day, it feels as though we are being exposed to ever more appetizing (and typically high calorie) images of food, what some (perhaps pejoratively) call ‘gastroporn’ or ‘food porn’. Moreover, the shelves of the bookstores are increasingly sagging under the weight of all those cookbooks filled with high-definition and digitally-enhanced food images. It has been suggested that those of us currently living in the Western world are watching more cookery shows on TV than ever before. Such food shows often glamorize food without necessarily telling a balanced story when it comes to the societal, health, and environmental consequences of excess consumption.”

“At the same time, the last few years have seen a dramatic rise in the dining public’s obsession with taking images of the foods that they are about to eat, often sharing those images via their social media networks. The situation has reached the point now that some chefs are considering whether to limit, or even, on occasion, to ban their customers from taking photographs of the dishes when they emerge from the kitchen. However, one restaurant consultant and publisher has recently suggested that the way food looks is perhaps more important than ever: “I’m sure some restaurants are preparing food now that is going to look good on Instagram”.

The paper goes on to discuss at length the evidence that exposure to images of foods can alter cognitive responses and create the need for constant dietary restraint, which may be more difficult for some than others.

But not all images of food have these effects:

“These results support the view that people rapidly process (i.e. within a few hundred milliseconds) the fat/carbohydrate/energy value or, perhaps more generally, the pleasantness of food. Potentially as a result of high fat/high carbohydrate food items being more pleasant and thus having a higher incentive value, it seems as though seeing these foods results in a response readiness, or an overall alerting effect, in the human brain.”

As for the parts of the brain that are stimulated by exposure to food images – pretty much all of it. Thus, in one study:

“…the results revealed that obese individuals exhibited a greater increase in neural activation in response to food as compared to non-food images, especially for high-calorie foods, in those brain regions that are associated with reward processing (e.g., the insula and OFC), reinforcement and adaptive learning (the amygdala, putamen, and OFC), emotional processing (the insula, amygdala, and cingulate gyrus), recollective and working memory (the amygdala, hippocampus, thalamus, posterior cingulate cortex, and caudate), executive functioning (the prefrontal cortex (PFC), caudate, and cingulate gyrus), decision making (the OFC, PFC, and thalamus), visual processing (the thalamus and fusiform gyrus), and motor learning and coordination, such as hand-to-mouth movements and swallowing (the insula, putamen, thalamus, and caudate).”

But this knowledge is not all bad. There is also some evidence that digital manipulation of images of vegetables and other healthy foods can make them more attractive and thus hopefully increase their consumption. Whether or not this would actually work in practice remains to be seen.

“Given the essential role that food plays in helping us to live long and healthy lives, one of the key challenges outlined here concerns the extent to which our food-seeking sensory systems/biology, which evolved in pre-technological and food-scarce environments, are capable of adapting to a rapidly-changing (sometimes abundant) food landscape, in which technology plays a crucial role in informing our (conscious and automatic) decisions.”

Are you affected by exposure to foodporn? Is this really a problem?