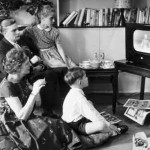 Regular readers are well aware that I am more interested in the ‘whys’ of why people eat than in the ‘whats’ of what they eat.

Now a paper by Colin Chapman and colleagues from Upsalla University, Sweden, published in the American Journal of Nutrition, looks at the key lifestyle drivers of overeating, with a particular focus on TV watching, sleep deprivation and alcohol consumption as studied in controlled laboratory settings with healthy volunteers.

Their search of the literature yielded 8 television studies, 5 sleep studies, and 10 alcohol studies.

All three of these factors had significant effects on food intake in the laboratory setting with alcohol having the strongest effect, followed by sleep deprivation and TV viewing.

With regards to the possible mechanisms on how these behaviours affect food intake, the authors have the following to offer:

“Alcohol is known to induce alterations in circulating ghrelin, a peptide implicated in food reward. In addition, alcohol affects g-aminobutyric acid and opioid systems. The alteration of g-aminobutyric acid signaling in reward centers of the brain stimulates appetite, and opioid signaling has been implicated in regulating the orosensory reward components of eating. These pharmacologic findings are consistent with human studies that showed a greater increase in hunger during the early phase of a test meal after an alcohol preload compared with an energymatched carbohydrate preload. This mimics the pattern of response shown when the palatability of food is enhanced through flavor manipulation.”

“There is similar evidence that links sleep deprivation to an increase in the hedonic value of food. Sleep loss causes a constellation of metabolic and endocrine changes, including an increase in circulating ghrelin. Interestingly, recent studies on sleep deprivation have found that it increases overall brain response to palatable food image. In particular, short sleep increased activation in brain areas involved in reward processing, such as the putamen, nucleus accumbens, thalamus, insula, and anterior cingulate cortex. This strongly suggests that sleep deprivation, like alcohol, leads to deregulation of reward system activation in response to food.”

“Several of the studies included in the meta-analysis found that the effect of television viewing on food intake was most pronounced with high-calorie foods, which suggests that television viewing alters the saliency of food reward. Epidemiologic studies have shown a similar trend, in that those who watch more television tend to snack more while watching and to consume more energy-dense snacks. Additional evidence suggests that watching images of palatable food increases plasma ghrelin concentrations.”

The implications of all of this, when seen in the context of habitual reinforcement and perpetuation of such behaviours are worth noting:

“With regard to the lifestyle factors analyzed, all three, when experienced habitually, should strengthen memory traces that trigger reward expectancy to food cues: that is, when presented with rewarding food or food cues, people who often suffer from sleep deprivation or who often watch television or drink alcohol while eating are more likely to experience a greater reward response as a result. In addition, both alcohol and television likely become their own conditioned cues for those who consume food in conjunction with these factors.”

The authors are optimistic that addressing these factors early on (especially in kids and young adults) may be important measures to reduce the risk of obesity. Thus, they cite evidence that curbing alcohol consumption, increasing sleep time and reducing TV viewing may all lead to decreased accumulation of body fat.

Based on these findings I guess it is time to lay off the night cap, turn off the TV and go to bed.

p.s. Hat tip to Carlene for pointing me to this article.

p.p.s. Maintaining this blog costs both time and money – if you have enjoyed these posts, please consider making a small donation to the upkeep of this site by visiting my website by clicking here.