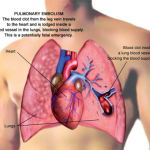 Readers of these pages are well aware of the increased health risks associated with excess weight. They are also aware that not everyone with excess weight has the same level of risk and that much may depend on the location rather than the total amount of excess fat.

This point is once again illustrated in a study by Knut Borch and colleagues from the University of Tromsø, Norway, just out in Arteriosclerosis Thrombosis and Vascular Biology.

In this study, Borch and colleagues assessed the utility of various obesity measures for identifying subjects at risk for venous thromboembolism (VTE), a potentially life-threatening condition. They analysed data from the Tromsø Study (1994-1995), which included anthropometric measurements in 6708 subjects aged 25 to 84 years.

There were 222 VTE-events during a median of 12.3 years of follow-up and all measures of obesity were associated with significantly increased risk.

However, the strongest association was found in both men and women with waist circumference, an indirect measure of abdominal obesity. A waist circumference greater than 85 cm in women and 95 cm in men was associated with an approximately 2 and 3-fold increased risk for VTE, respectively.

This is perhaps not surprising as abdominal obesity, characterized by excess accumulation of visceral fat has been associated with other cardiovascular risk factors including elevated levels of fibrinogen and reduced markers of thrombolysis.

These findings are of particular relevance for overweight and obese individuals with abdominal obesity, who have additional risk factors for VTE like trauma, immobilization or oral contraception.

Whether weight loss in abdominally obese patients reverses this increased risk remains to be seen.