A Wellness Map of Canada 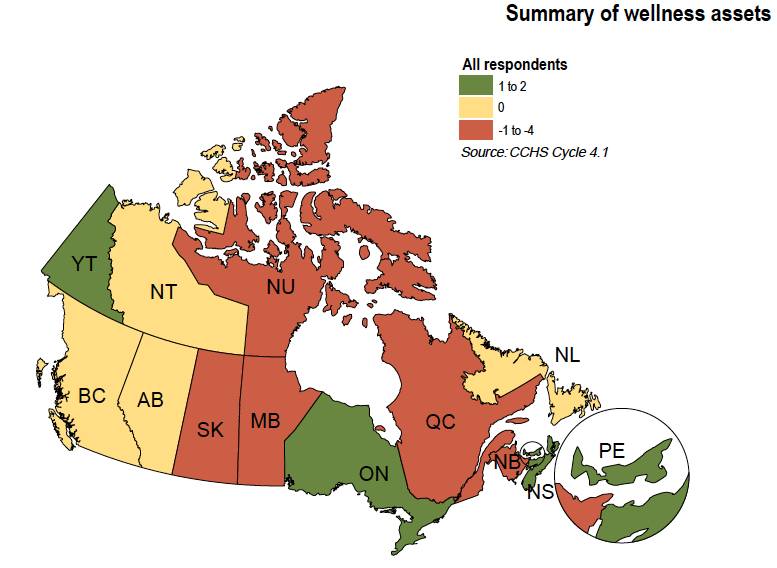 One of the many e-mails that reached me in response to yesterday’s post on Living and Wellbeing in New Brunswick, was a mail alerting to me to the existence of a detailed report on the The Geography of Wellness and Well-being Across Canada.

Co-funded by the British Columbia Ministry of Healthy Living and Sport and the Michael Smith Foundation for Health Research, this report was published as a supplement to the 2009 British Columbia Atlas of Wellness, prepared by Brian McKee and colleagues from the Department of Geography at the University of Victoria.

Apparently, this interest in wellness date back to 2005, when the BC Government introduced a new health promotion initiative called ActNow BC. This initiative, in turn, was a response to concerns raised by a 2004 report from the BC Select Standing Committee on Health which noted that 40% of the most chronic diseases resulted from preventable factors such as smoking, poor diet, physical inactivity and the resulting unhealthy weights, especially obesity, and irresponsible alcohol use.

According to this atlas, overall, Prince Edward Island, Ontario, Nova Scotia and Yukon exceeded the Canadian averages for wellness assets, with PEI and Ontario showing the best scores in this area at +2. Nunavut, Saskatchewan, Manitoba, Quebec, and New Brunswick had overall negative scores for wellness assets with Nunavut having the poorest score of -4.

In an update and Critical Synthesis of Wellness Literature, published in 2010 by Gord Miller and Leslie Foster, also from the University of Victoria, the authors attempt to provide a working definition of ‘wellness’. They also provide a historical overview of the concepts of wellness and an extensive overview of the scientific literature on this issue.

As the authors note, there are several key dimensions to defining wellness, including: physical; psychological/emotional; social; intellectual; spiritual; occupational; environmental; cultural; economic; and climate. They discuss each of these dimensions and provide suggestions on how each of them could be measured.

Certainly a worthwhile read for anyone interested in these issues.

Hat tip to Sadiq Lula for pointing me to these resources