As any clinician knows, patterns of fat deposition tend to vary greatly even in people with similar amounts of total body fat.

Not only are there the typical “male” and “female” patterns (commonly referred to as “apple” and “pear” shape) but there are also important differences in how much of excess fat is stored underneath the skin versus inside the abdomen or in other organs.

These patterns of fat distribution have important consequences for the health risks associated with excess fat – excess skin or subcutaneous fat tends to have little impact on cardiometabolic risk (some even claim it may be protective) whereas excess fat stored in muscle or internal organs are linked to a wide range of health problems like diabetes, fatty liver disease, or sleep apnea.

Why people differ in their propensity to deposit fat in these different locations is not entirely clear. Some of this is certainly regulated by sex hormones and cortisol but it has long been suspected that there may also be genetic factors at play.

In a rather surprising twist, this notion is now supported by a paper just published in PLoS one by Kyung-Tai Lee and colleagues from the National Institute of Animal Science in Suwon, North Korea.

Based on previous studies that showed a high heritability for backfat thickness (between 50% and 70%) and intramuscular fat (38% and 67%) content in pigs, Lee and colleagues first sequenced a region of pig chromosome 6 that had been shown to affect fatness traits in these animals.

This led to the identification of 13 genes, 8 of which are interestingly also involved in psychiatric disorders and can affect nerve growth and function. All of these genes appeared to be related to back fat thickness (i.e. excess skin fat) rather than to muscle fat.

From these studies the researchers conclude that common variations in these neuronal genes may surprisingly determine not only the genetic risk for obesity but also play an important role in the development of excess skin fat.

How exactly these genes regulate skin fat will certainly now be the focus of intense research.

To clinicians, these studies should serve as a reminder that the regulation and function of fat tissue is staggeringly complicated and fascinating.

Clearly fat distribution is not just a function of calories in and calories out. 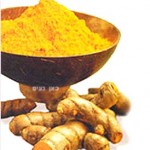 Curcumin is the principle ingredient of tumeric or “haldi” as it is called in Hindi. This is the spice that gives Indian curries their bright yellow color. The tumeric root (a relative of ginger) has long been thought to have all kinds of medicinal properties, and growing up in India, I remember my mother treating boils and abscesses on our household pets with tumeric paste. Curcumin is supposed to not only have antibiotic, antiinflammatory, antiarthritic, antioxidant and anticancer properties, regular consumption is also alleged to increase brain power.

Now, a study by Asma Ejaz and colleagues from Tufts University, Boston, MA, USA, just published in the Journal of Nutrition, suggests that curcumin may also reduce fat formation by blocking the angiogenesis (growth of new blood vessels) necessary for the expansion of adipose tissue and by positively changing fat cell metabolism.

The researchers studied the effect of curcumin both on cultured 3T3-L1 adipocytes as well as in mice fed a high-fat diet.

Leaping from mouse to man, the authors speculate that dietary curcumin may not only help prevent obesity but may also have favourable effects on fat metabolism.

How much of an impact this finding may have on the obesity epidemic remains to be seen – clearly, eating a daily dose of curry (as most Indians do) is not a sure bet when it comes to preventing obesity as evidenced by the burgeoning obesity epidemic in India (but who knows, perhaps the Indian obesity epidemic would be far worse without the curry?)

In any case, I am certainly happy for any excuse to stop by my favourite Indian restaurants.

Yes, the rapid spread of obesity around the world is reminiscent of the spread of an infectious diseases (albeit in slow motion), but is an obesity infection even possible?

Well, yesterday’s obesity news in the media was once again all about the obesity virus. These media reports were prompted by a new paper by Miloni Rathod and colleagues from Wayne State University, Detroit and the Pennington Biomedical Research Centre, Baton Rouge, published in Obesity.

This report is a follow-up to the many excellent studies from Nikhil Dhurandar’s group, which first suggested that the rather common human Ad36 virus may play a role in adipogenesis (formation of fat cells).

In the present study, using cultured mouse preadipocytes, the researchers demonstrated the following:

1) That the adenovirus Ad36 but not Ad2 stimulates fat accumulation as well as the expression of specific early, intermediate and late adipogenic marker genes in cultured mouse preadipocytes.

2) That treatment of adenovirus Ad36-infected cells with an antiadenoviral agent reduces fat accumulation in preadipocytes, demonstrating that viral mRNA expression is required for the process.

3) That although infection with adenovirus Ad36 amplifies the adipogenic response to a differentiation cocktail (containing insulin and other promoters of adipogenesis), this cocktail is not essential for Ad36 to induce formation of fat cells.

Thus, clearly, this human adenovirus can infect mouse cells to promote fat cell formation and it certainly appears worth the effort to try to elucidate exactly how this virus has this effect.

But what does this mean for human obesity?

Firstly, the Ad36 virus is extremely common and many people probably carry it – whether or not carrying this virus actually means that you are likely to gain more weight remains to be seen.

Secondly, it is important to remember that formation of fat cells in itself may not be a bad thing. After all, fat cells are the safest place to store extra calories. It is indeed widely believed that failure to accomodate excess calories in fat tissue (as a result of limited fat-cell formation) may promote fat deposition in other tissues (liver, muscle, heart), thereby promoting the development of metabolic risk factors like insulin resistance. Thus, infection with Ad36 may cause you to grow more fat cells, but may very well also turn out to actually decrease your risk for diabetes and other metabolic problems.

Thus, it will certainly be a while before antiviral treatments or even vaccinations will make it into our clinical armamentum for obesity prevention or management.

Nevertheless, it certainly is a good story and illustrates the fact that the study of obesity (and its origin) is anything but as simple or straightforward as many people believe.