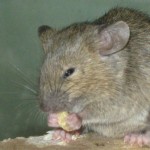 Last week, an article in the New York Times with the title “The Obesity-Hunger Paradox“, addressed the issue of food insecurity – or how, not knowing when or where your next meal will come from, can make you overeat – thus promoting obesity.

Interestingly, this month’s issue of OBESITY uses an animal model to illustrate a similar point.

Interestingly, one of the big changes in feeding behaviours with calorie restriction was overeating, where the mice ate almost four times the amount of food in a two hour period, than when they had free access to food.

Importantly, despite the overall calorie restriction, the researchers found no change in body weights – rather, the calorie-restricted mice appeared to become fatter, exchanging fat for lean tissue. They also showed a significant reduction in energy expenditure.

The researchers interpret their evidence as supporting the notion that the gorging behaviour in response to food “uncertainity” alters energy partitioning resulting in more effective triglyceride production and fat storage. This altered metabolism may in part be due to the hormonal changes resulting from the “stress” of calorie restriction.

Clearly, these findings should be of interest to those of us who wonder about the long-term effects of caloric restriction, meal skipping, and binge eating.

The study may also explain why chronic (especially intermittent) dieting can be counterproductive and in some individuals paradoxically increase fat stores.

Certainly the study should remind us that any restriction of food intake (whether voluntary or involuntary) can profoundly change our “feeding” behaviour and change the way our bodies handle calories.

The next time you wonder why you or your patients are not losing weight despite restricting calories, remember that there is apparently no end to the tricks our body will come up with to protect its weight.