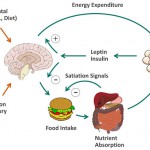 I have personally never bought into overly simplistic notions of what may or may not cause obesity (or what we can do about it).

One of these “simplistic” notions that has gained considerable traction recently is the idea that insulin resistance (caused by over-consumption of high-sugar/high-glycemic foods) leads to “internal starvation” and provides a (calorie-independent) stimulus for weight gain.

While this hypothesis has garnered much recent popularity due to enthusiastic and outspoken supporters like Dr. David Ludwig (Always Hungry?) and Gary Taubes (Why We Get Fat), the basic idea is neither new nor unchallenged.

While insulin may well be involved in the “non-caloric” regulation of body weight – there are numerous bits and pieces of the hypothesis (as popularly presented by Ludwig and Taubes) that are inconsistent and not backed by hard observational and/or experimental data.

For an enlightening read on why the insulin-hypothesis of obesity may not be all that accurate, readers may wish to read an elegant discussion of this issue by Dr. Stephan Guyenet, a neuroscientist at the University of Washington, and author of Whole Health Source, a popular health blog.

Without going through all the pros and cons of the insulin argument here (these are eloquently discussed by Guyenet on his site), allow me to quote his summary,

“In summary, several key predictions of the insulin model are not supported by the evidence, explaining why this model doesn’t get much traction in my field (neuroscience).  There is essentially no direct evidence that the proposed mechanism occurs during or after normal weight gain, a fair amount of direct evidence that it doesn’t, and the arguments in favor of it are based on indirect evidence whose relevance to common obesity is often questionable.”

While I have no stake in this discussion either way, I generally remain sceptical of overly simplistic explanations for complex biological phenomena. Guyenet’s arguments are anything but simplistic.