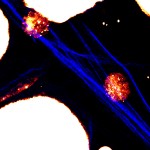 Poor diet, lack of exercise, obesity and smoking account for the vast majority of cancers; the role of genetic factors is by far overrated.

Indeed, the dramatic impact of obesity on cancer is now increasingly appreciated – one in three cancers may be caused by obesity (or as a result of lifestyle factors that promote obesity). It is therefore perhaps not surprising, that large prospective studies have shown an almost 60% reduction in deaths from cancer with bariatric surgery.

But how does obesity (or poor diet) promote cancers?

New insight into the mechanistic relationship between high fat intake (not uncommon in obese individuals) and cancer come from a recent study published in BMC Cancer by Thuc T Le and colleagues from, Purdue University, West Lafayette, Indiana, USA.

Evidently, much of cancer should perhaps now be best classified as a “lifestyle disease” (a term often used to “trivialize” obesity).

Prevention and treatment of obesity may prove to be the most effective “cure” for cancer after all.

AMS
Edmonton, Alberta
Hat tip to Jacob Berkowitz for bringing the latter study to my attention.