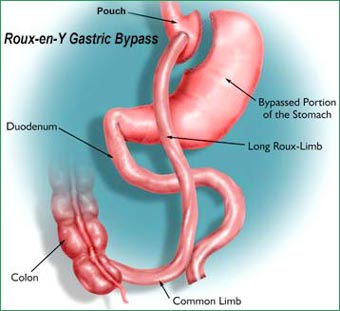 There are many reasons why gastric bypass surgery works – these include alterations in hunger and satiety, sensory responses to food as well as changes in neurohormonal factors linking the altered gut physiology to energy metabolism.

Now, a paper by Nima Saiedi and colleagues from Harvard University, published in SCIENCE, suggests that at least part of the beneficial effect of Roux-en-Y Gastric Bypass (RYGB) surgery may result from metabolic reprogramming of the gut in a manner that contributes to increased glucose disposal.

The researchers performed RYGB in obese and diabetic rats and demonstrated that the shortened “Roux” limb, which is exposed to undigested food, displays significant hyperplasia and hypertrophy to meet the increased demand. These adaptive changes include reprogramming of intestinal glucose metabolism to meet its increased bioenergetic demands, thereby substantially increasing its own glucose requirements (as an energy source for growth and altered metabolic pathways).

Thus, the authors suggest that the improvements in type 2 diabetes commonly seen after RYGB is at least in part attributable to increased glucose disposal rates by the gut itself.

Obviously, as pointed out in an accompanying editorial by Hans-Rudolf Berthoud, this is not the whole story as it is now well documented that much of the initial improvement in glycemic control is related to reduced caloric consumption.

Nevertheless, (although not mentioned by the authors or commentator) the paper does perhaps provide an explanation for the previously noted increase in  metabolic requirements (or rather the smaller than expected decrease in metabolic rate following weight loss) often seen in RGYB patients allowing them to sustain their weight loss on a higher caloric intake than non-surgical patients losing similar amounts of weight.

Thus, even if these intestinal changes in the end only add a few hundred extra calories to daily energy requirements, they do add another interesting aspect to the question of why surgery works.

Furthermore, if these metabolic changes in the gut could be simulated through pharmacological agents, these findings may also suggest the gut as a new target organ for anti-diabetic medications