Home » blog » Who is Getting Bariatric Surgery in Canada?

Who is Getting Bariatric Surgery in Canada? 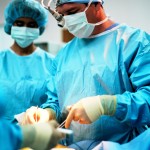 In a paper we have just published in the International Journal of Equity in Health, we report on the characteristics of the population eligible for and receiving publicly funded bariatric surgery in Canada.

We looked at data from adult (age > 20) respondents of the 2007–09 nationally representative Canadian Health Measures Survey (CHMS) to estimate the prevalence and characteristics of the surgery-eligible and ineligible populations. We also looked at federally mandated administrative healthcare data (2007–08) were used to characterize surgical recipients.

We found that In 2007–09, an estimated 1.5 million obese Canadian adults met eligibility criteria for bariatric surgery.

Self-rated mental health and quality of life were lower and comorbidity was higher in surgery-eligible respondents compared with the ineligible populations.

Not surprisingly, the annual proportion of Canadians eligible for surgery that actually underwent a publicly funded bariatric surgery between 2007–09 was 0.1%.

With the exception of type 2 diabetes, obesity-related comorbidity prevalence was much lower in surgical recipients compared to those eligible for surgery.

Thus, in 2007-09, 99.9% of individuals eligible for surgery did not get it in the public system. While access to surgery has increased across Canada, we are still well below any accepted bench-mark for the proportion of eligible patients who receive an accepted and effective treatment.

In fact, I can think of no other health care problem, where only 0.1% of the affected population are offered treatment.

Some of this is clearly due to lack of trained and qualified medical professionals, who can offer these services.

However, I cannot fail toI wonder how much of this discrepancy is simply a result of weight bias and discrimination?